It belongs to the order Perciformes Serranidae family; calico bass also called, seaweed under California, under rocks, under the sand, low bull, salmon seaweed, cabrilla ,or under kelp.

It is distributed in the eastern Pacific: the Columbia River in Washington, EE.UU. to southern Baja California, Mexico.

Bass algae is common along the central coast of California and southern and northeastern Baja California, and runs from the Columbia River, Washington, to Bahia Magdalena, Baja California. Usually they found in or near kelp beds, reefs, around rock jetties and dams or structures in shallow water and about 150 pies (46 m). Although it is found throughout the water column, the larger species generally occur in deeper waters. 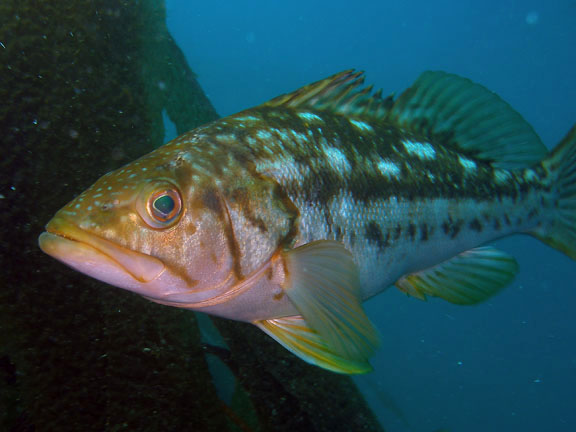 Bass algae, a member of a large group of Seabass, inhabiting the eastern Pacific, It is a robust fish with a typically low ( BASS ), well known. Most fishermen in their territory recognize the low algae, as it is one of the most important goals of Southern California fishermen.

Usually they found in or near kelp beds, shallow waters and a 50 m, but mostly 2,4-21m. Found throughout the water column. Large specimens usually occur in deeper waters. Power under benthic invertebrates (especially crustaceans), adults feed on fish and cephalopods Both juveniles and adults can feed on plankton, when it is abundant. They are pelagic players.

The color is brown to olive green, with pale blotches on the back, increasingly clear at the bottom. They are easy to distinguish from other low, by the fact that the spines of the third, fourth and fifth ridges are of the same length, while the third spine of low sand is much more than the fourth and fifth. 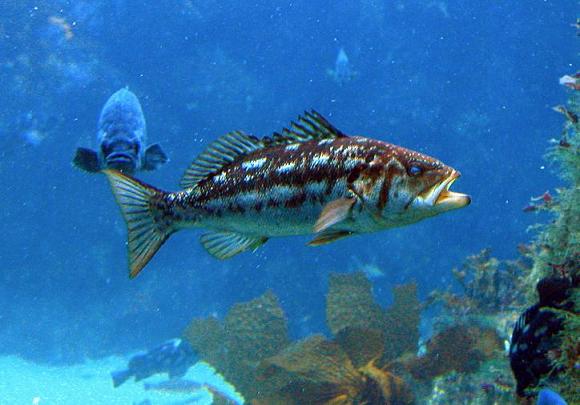 Kelp bass are slow growing, having in 5 a 6 years before reaching the minimum legal size limit 12 inches, time when almost everyone is able to spawn. Since not migrate, and they tend to be territorial, They are susceptible to fishing pressure and can depleted by overfishing in an area.

Because it is considered one of the best fish to eat and a powerful fighter, It is highly sought by sport fishermen. You can fish with live bait most of the area, as well as a variety of artificial lures. The best fishing season is from summer to fall, although you can fish all year round in some areas.