Catfish is a freshwater fish, Family of Siluridae, order Siluriformes, since its introduction in the reservoir of Mequinenza in 1974 -from their habitat in large rivers of Central Europe- It has spread elsewhere in the basin Ebro, along the Ebro River and its tributaries, especially the river Segre. It has also been the subject of illegal introductions carried out by individuals in other rivers, reservoirs and lakes in Spain. The last complaint known about his unwanted presence made in October 2009 the Ministry of Environment of the Generalitat Valenciana and refers to the presence of these fish in the reservoir Forata (Hoya de Buñol).

This is a fish benthic, equipped with large beards . It is ictiófago, but it does not reject other vertebrates.

The catfish spawns from May to July. The male digs shallow nest, in areas with lots of greenery, and the female lays thousands of eggs each 3 mm diameter. puts 20000 a 25000 by weight kilo. After 3 a 10 days of incubation, during which the nest is guarded by the male, The eggs hatch into small larvae-like tadpole. These fingerlings grow rapidly, especially if temperatures are high and have enough food. They can measure 35 cm long after a year and a 50 cm at two years, and they reach sexual maturity when they weigh 1 a 2 kg, which usually they get three or four years (nine colder climates). A few catfish 25 weighs years 65 kg.

It feeds on all kinds of prey and carrion. In the juvenile phase eats small invertebrates background and adult eats mostly fish like carp, barbos,zander mainly bonefish in order any fish that is in your area including even comiendose, but also other animals, like ducks, rodents, snakes,frogs, crabs…, to which suction traps with his big mouth.

As you would expect in a fish active in the dark murky waters, prey detected by sight, but it does so mainly through other senses. It has electroreceptors in barbels which also have function táctil-, jaw line and side-a sensitive organ to vibraciones-, and chemoreceptors (sense of taste) in sensory whiskers, in the mouth and other body parts. further, It has a good nose and a fine ear that allows it to detect sounds well produced out of water. Danube fishermen attract him banging on the surface of the water with a kind of stick called clonk and is attracted by the low frequency sound waves. It remains very active in winter, hidden in the background, and fed very little.

Catfish is the largest inland water fish in Europe, and one of the most voluminous of water epicontientales; You can reach a large concessionary, until 500 cm y 300 Kg. 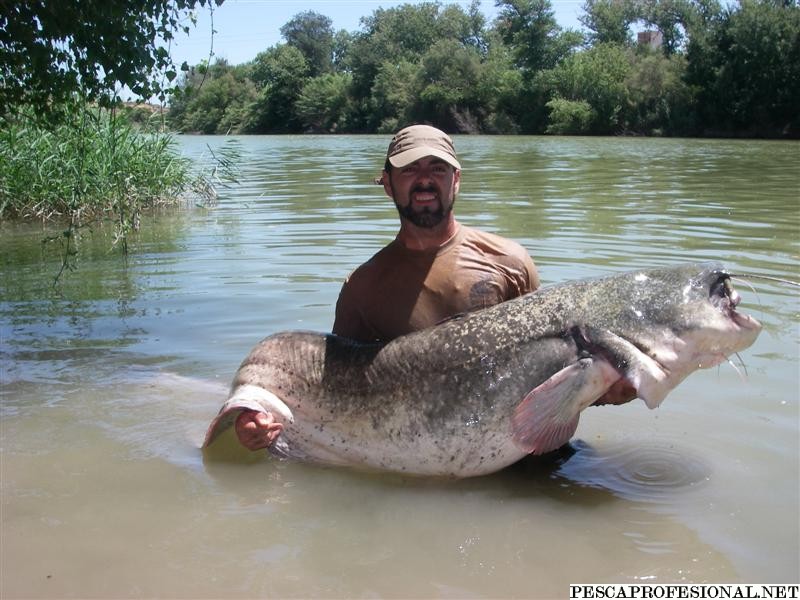 Catfish is a fish that grows extremely fast if you have conditions in his favor, and this reservoir, by setting the area, the bottom, depth and food, its development is as much, higher than the rest of Europe.
Catfish was perfected, carp population has been controlled and the growth rate is much higher than the rest of Europe.
Was it really so ?
Do we have the catfish in Spain because someone decided for himself, that had to control the population of cyprinids in the reservoir Ribarroja ?
What cyprinids fishermen who they have been severely reduced their pescatas say ?
What black bass fishermen say, they have also been severely reduced their pescatas ?
Is all this is because of the introduction of catfish ? Or it has also helped the introduction of walleye ?.
If the owner of the dam before the tent was what is now the catfish and walleye.
Does anyone think to introduce crocodiles to end the excessive population of bullheads ?
In short, and in all honesty, we are in the XXI century and we have a fishing paradise both the reservoir Ribarroja, as in the reservoir of Mequinenza.
There are many fishermen attracted by this new species and check it feels like to catch a monster that can reach 100 kilos weight, They come from many parts of the Spanish geography and not only that but also from many parts of European geography, Britain. Holland, Germany, Italy, France, etc…
All this translates into an arrival of tourism to the area and economic consequences this means.
What is the difference between introducing a non-indigenous species that brings wealth and uncontrolled construction which took place in the early 60 on the Spanish Mediterranean coast ?.
Spain became known through its tourism and continue to sell.

What's wrong with that ? 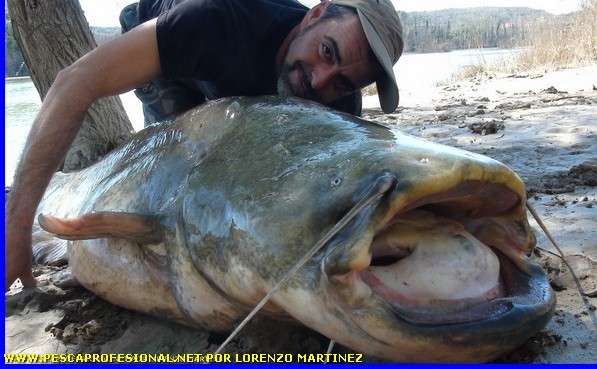