The giant snakehead or giant Mudfish (Channa micropeltes) It is the largest in the family Channidae, Able to grow over 1 meter length (3 pies) and a weight of more than 20 kg (40 pounds).

It is widely distributed in freshwater in Southeast Asia and parts of India. Other names include red snake head, snakehead Malabar, and take Ikan.

The youth of the giant snakehead are red, orange and black with side stripes that appear after about two months. As the head of mature giant snake, They lose their stripes and instead develop a pattern in black and blue in his upper body.

The giant snakehead is in Vietnam, Indonesia, Laos, Thailand, Malaysia, India and, possibly, Myanmar. It has a strange dilemma distribution, They are living in Southeast Asia and southwestern India, about 2500 km away. 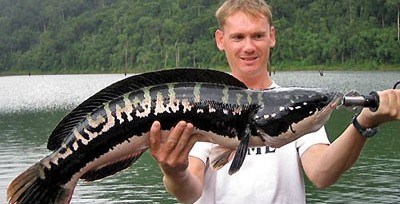 In Thailand this fish is prepared in a variety of ways, especially grilled, It is a common food offered by street vendors. 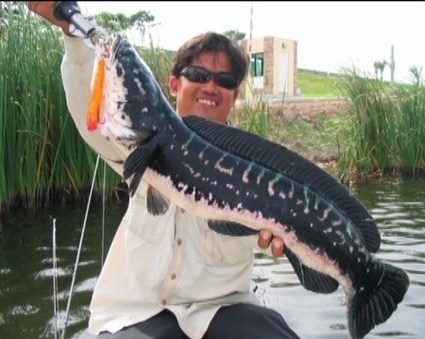