The Golden, damita the pirayú (Salminus brasiliensis, without. S. maxillosus) caraciforme is a large fish that inhabits tropical and subtropical waters of the basins of the rivers Parana, Paraguay, Uruguay, Chapare and Mamore in South America. 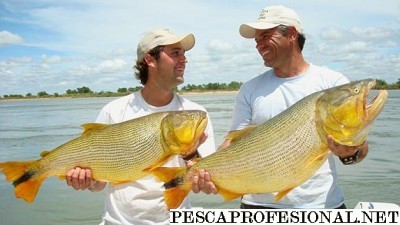 Es uno de los principales objetos de pesca deportiva en la Argentina, along with the various species of surubí (Pseudoplatystoma spp.), and one of the most demanding prey of freshwater fishing in the world; exceeds meter long and reaches 25 kg, and strong musculature due to habitat, river rapids in the region, They make it difficult to capture. 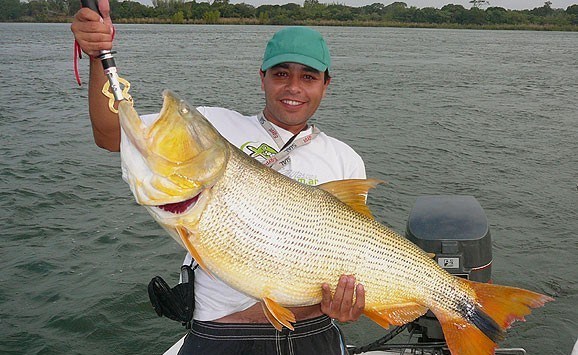 S. brasiliensis is a salmonid fish body, sturdy, moderately compressed laterally. The largest recorded specimens were around 11 dm y 25 kg. The head is large, up to a quarter of the total length, approximately conical shape with the oblique upper front. Mouth reaches approximately half of the head, and shows strong teeth conically; The eyes are small, and they are located in the retracted position. Cappings are a good size, presenting radial grooves.

The abdomen is long. The dorsal fin is located toward the middle of the back; the fat is almost nonexistent. Ventral tangentially placed ahead of the insertion of the dorsal, while anal is close to the flow, which it is slightly lobed, media radios elongados. Peduncle tail is powerful and robust, as befits his habit of fast swimmer. It is covered with large scales, somewhat higher along the caudal peduncle, yellow-orange in the operculum, with slightly darker back and with greenish reflections, and belly silver or white. Each scale on the flank has a small patch of dark brown. The fins are orange, with a flange crimson; a black spot strip the end of the flow radios. 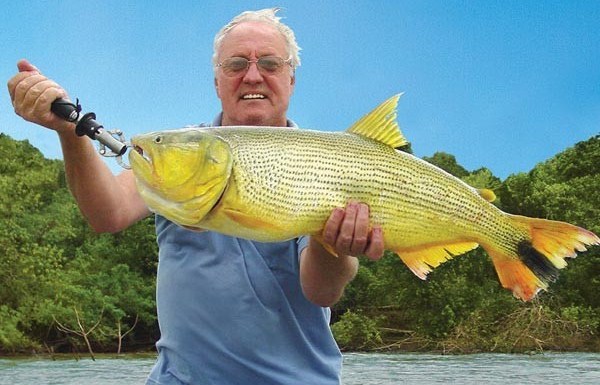 S. brasiliensis es un voracious predator. Inhabits the strong currents are formed in rocky shoal or mouths of tributaries, where its superior musculature allows you to maneuver more easily than their prey, general other fish, and attack when he is helpless in the stream.

Regularly migrates along the rivers of their environment following their favorite prey, especially the tarpon (Prochilodus lineatus). Other species caught are the vogue (Leporinus obtusidens), catfish (Pimelodus spp., Parapimelodus valenciennesi) and pomfret (Serrasalmus marginatus), and crustaceans of the genus Macrobrachium.

To play back the current migration called piracema, over the months of October and November. Several males follow each female, courting; in the courtship ritual copies jump, peeling water in a distinctive image. Fertilization is external, deposited up 200.000 roe on a sunset. They do not care Roe, correntosos deposited at sites, of which after incubation day fry hatch, about 5 mm length. Sexual maturity is reached in the second year for males and one for females; immature specimens feed protists and then crustaceans and insects.

They can reach 14 year old.

The gold is sought in the waters of strong current where it stalks its prey; The ideal time is between May and August, when copies have better size before starting the migration fatiguing for commissioning. Practiced mostly fishing mode waiting embarked, background bait or floating.

Also you can fish with all the variety of artificial baits,including fly fishing.

Intensive fishing, sport and commercial, It has significantly diminished its population in the Parana River, which was once its main reservoir, and ecological damage caused by the dam of Yacyretá have aggravated the situation. Today its fishing Argentina is controlled, you existing ban on the breeding and restrictions on the minimum size of the pieces collected.

Among the main fishing reservoirs correntina town of Paso la Patria account, where the Festival is held annually Fisheries Dorado.