THE EUROPEAN STURGEON IS ONE OF THE LARGEST FISH OF INLAND WATERS. 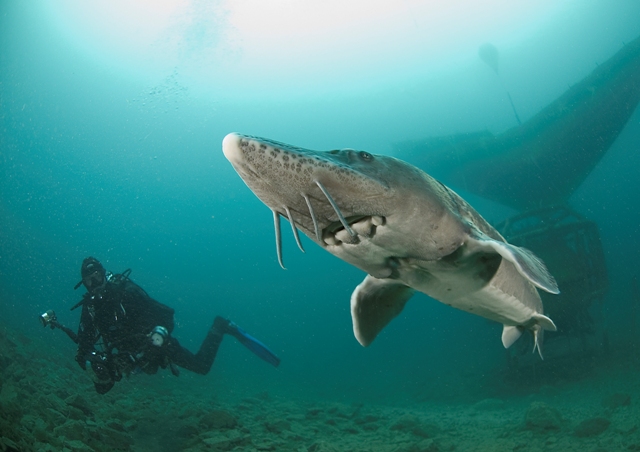 The common sturgeon (Acipenser sturio), also known as sollo or Marión, It is a kind of acipenseriforme fish of the Acipenseridae family, perhaps the most representative species of the genus Acipenser.

The maximum length described was a male reached 5 meters,2 and the maximum weight was 400 kg.

It's kind of great size that can reach 350 cm total length and 300 Kg and can live to a hundred years. The body is elongated pentagonal with a large tail fin . No scales and body is covered with small denticles and five rows of bony plates (10 a 15 dorsal plates, 29 a 38 side plates and 10 a 12 ventral plates). presents 4 Chins and a very prominent snout. The back is brown or dark gray paler on the sides and white belly.

anadromous species that spends most of its life at sea but reproduce in freshwater. Sturgeon lives at the bottom at depths of 5 a 60 meters. small crustaceans mainly feeds including invertebrates, worms and molluscs. Juveniles migrate to river mouths to 4 O 5 months after birth and remain in estuaries over a year.

Once the range is extended by rivers across Europe, from Scandinavia to the Black Sea, but currently the only abundant populations in the wild are restricted to the basin of the Garonne river, Dordogne and Gironde. Throughout France it is estimated that there are only a few thousand individuals.

Playback is carried out from May to late June. Sexually mature males the 8-12 years and females to 13-16 years. Adult individuals do not feed during the breeding season. The number of eggs usually between 300 thousand 2 millions. Development of eggs lasts about one month 17 Temperature ° C.

The main causes of decline have been regulating channels, decreasing flow, damming, pollution and gravel mining in areas frezaderos. The construction of the dam of Alcalá del Río upstream of Seville 1930 He prevented the passage of sturgeons much of their usual spawning grounds. 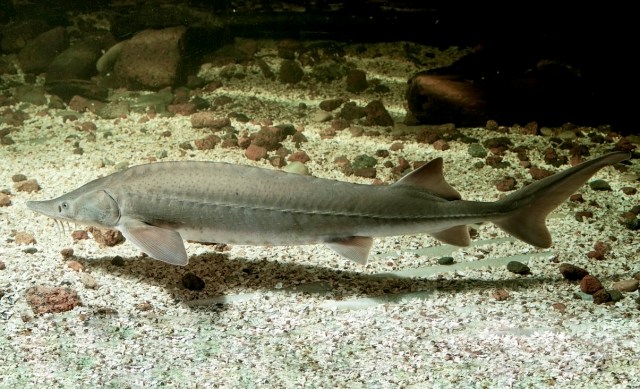 Acipenser Acipenseriformes is a genus of fish of the family Acipenseridae popularly known as sturgeons, mariones o sollos. They are euryhaline fish and anadromous. The genus comprises about twenty species, ventral mouth, five longitudinal rows of plates, that ascend rivers to spawn, you can reach 3,5 m length and 350 kilos weight, and whose eggs caviar is prepared. Only between 12 and the 16% weight of a female constitutes the caviar. The rest is skin (used for the manufacture of portfolios), bones (no thorns) and meat.

This fish has existed 250 millions of years. Their habitat is associated with major river systems in the northern hemisphere, and besides being in the Black Sea and the Caspian, It appears in North America and Europe. Some of the best known species of sturgeon are the European Atlantic sturgeon (Acipenser sturio), whitefish (Acipenser transmontanus), the lake sturgeon (Lake sturgeon and another belonging to another genre: the beluga sturgeon (huso huso).

In Spain, plus A. sturio, It discussed whether there was released a variety of A. Guadalquivir River native naccarii, Adriatic sturgeon. Other scientists believe that the existence of this species in Spain is unproven. Be the “A. Sturio” or the “A. naccarii”, the native sturgeon has disappeared from the wild Iberian waters, but remains in the field of aquaculture only “A. naccarii”, since it is easier to raise than A. sturio, and thanks to specimens imported from other countries.