Spatula (PolyodontidaeCondrósteos family) They are primitive finfish. Paddlefish are distinguished by their large mouth and long snout.

In these spatula snouts are half the length of the whole body. There are only two extant species of these fish: Chinese and American paddlefish. American species are in the State of Missouri.

These fish are not closely related to sharks, But they have some body parts that resemble sharks, as their skeletons, mainly composed of cartilage, and flukes. 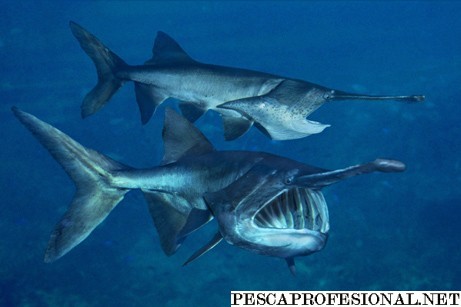 Chinese Spatula (Psephurus gladius) He lives in the Yangtze River. Nine feet (three meters) weighing 300 kg (660 pounds) there have been, reports 7 meters (23 pies) existen.A says that WILL fish despite the existence of such specimens this large is doubtful. It is said that now extinct Yangtze when not being exemplary.

once it thought to use the spatula to dig their snouts vegetation from the bottom of lakes and rivers. In fact, They feed by filtering water zooplankton, using the filaments of their gill arches called “Gill filter”.

Paddlefish lay their eggs in the middle of the river on bare rock or coarse sand. The eggs are adhesive and stick bedrock. Young people are swept downstream after birth and grow to adulthood in fresh water pools deep. 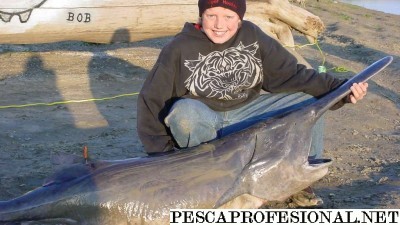 Spatula are poachers for their valuable white eggs, and they are protected by law in much of its range. Habitat destruction is also the cause of their numbers disminullan need more quickly.The spatula mighty rivers that have shallow pools with sand, rocky for desove.La water temperature is also important for spawning. Modification of rivers by building dams of, Dredging and disposal of water for agriculture is reason for reduction of spawning.

In some states,The spatulas are sufficiently abundant to allow fishing.