marlins, needles or weevils are a family of fish perciformes,large and edible,They fished for sport,related with sailfish and swordfish.

They are fast swimmers who live in most of the seas warm; They are very similar to Sailfish, of which only differentiates them dorsal fin,smaller.. They are nomadic, They found worldwide, near the sea surface, and are carnivores, They feed mainly on other fish.

As it happens in the sailfish,nasal bones of the upper jaw extend in a long and rounded sword.

Roundscale reaches a maximum weight of about 630 kilogramos.El black marlin, Makaira indica, It is a common species in the Pacífico.El marlín blanco, Tetrapturus albidus, It is a popular sport fishing fish in the Atlantic Ocean; this species and Mediterranean spearfish, Tetrapturus belone, They are present in the Mediterranean.

The marlin are incredibly fast, reaching speeds of about 110 kilometers per hour (68 mph). 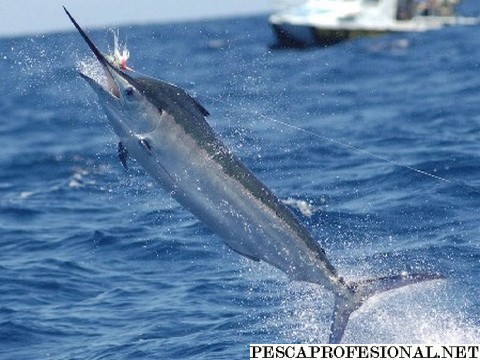 Blue Marlin Pacific's creates its habitat across the Pacific,including the waters of Mexico. The best season is considered from July to September,I could fish any species you want, ocurren.Muchos annually fluctuations travelers looking for blue marlin find it in October many fishermen believe there is a very high population of these. 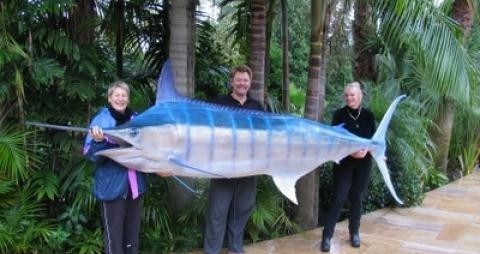 Pacific blue marlin is considered by many one of the best fish to practice this deporte.Creciendo even 2000 pounds(one of the largest specimens was captured in Hawaii 1970 and weighed 1,805 pounds)often they are seen from 300 a 600 pounds in Mexican waters in season, this fish is as acrobatic as poderoso.Vivo,Blue Marlin Pacific the tendency has performed as a competitive races colossal-time tracking and beautiful sea-air performances that gives you the opportunity even to those who are not fishermen witness their majestic belleza.El Blue Marlin is really a hard fish to catch. 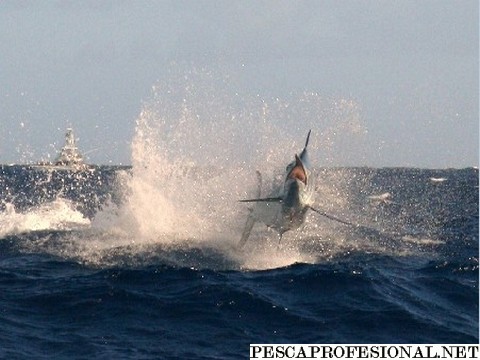 Mainly fished with artificial lures,but when conditions dictate,must use all technical conocidas.La techniques drop-backs is used frequently,using Ballyhoo or similar fish as bait lure as a live skipjack tuna used(like 7 a 15 pounds is good size)the lure should be displayed safely while attacking line.

The fisherman can get nervous when a big fish is close and it is impossible to prevent the attack,It is when the fisherman and boat captain must work together . While many fishermen have the habit of counting 10 seconds or more, depues the initial attack,Marlin opens his mouth wide and swallows the bait with great force,and the hook is stuck after 3 a 5 seconds after taking the señuelo.Un little more time and the fish tend to swallow the bait,having a high risk of mortality caused by fish hooks in the stomach. 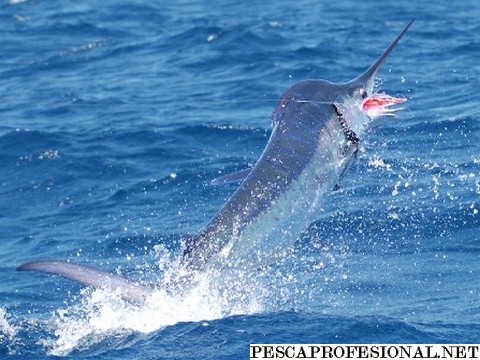 The current IGFA record in capturing the Pacific Blue Marlin is a copy of 1376 pounds,captured in Hawaii 1982. 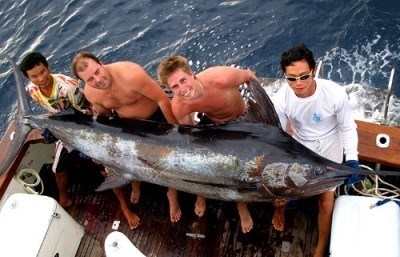 Eyou are It is a Marlin fish from the warm Indo-Pacific Ocean. The short, thick cast of the lower dorsal lobe and pectoral fin are traits that immediately identify this species from the abundant grated Marlin species that exist. The color is above blue and black and below the black gray and sometimes you can see a bronze glow above the fish. The stripes are also present but can be seen better already captured. 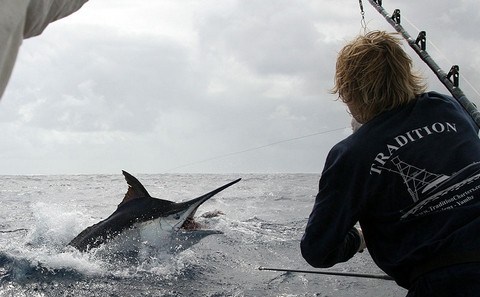 The black Marlin is regularly found swimming around reefs. The capture of this species declined in recent years. Usually by temptation or attraction that exists pescar.Los specialists believe that black Marlin if only limited to sport fishing , not waste in our seas.