The giant hammer hammerhead shark or giant (Sfiarn Mokarrn) It is a kind of elasmobranch Sphyrnidae carcarriniforme the family that inhabits all warm temperate oceans. 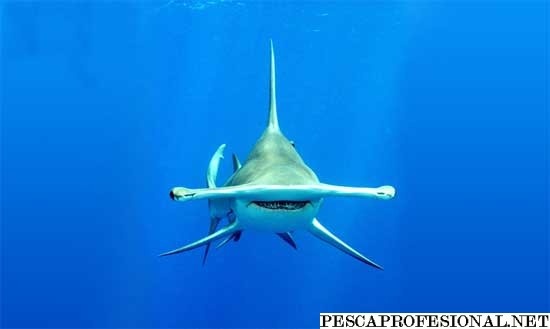 They are found in temperate waters around the world, from southern Canada to Chile and New Zealand. In Spain, They can be seen with some regularity in southern Spain, Canary Islands and Ibiza and Formentera. Sometimes, They disorient sharks because of the currents and goes to the Mediterranean coast and just entering itself by rivers to their highest channel. In the sanctuary of flora and fauna of the island of Malpelo in Colombia, It is very common to find large groups of hammerhead sharks, Cocos Island in Costa Rica's even said that it is one of the only places in the world where garanChalk diving with these animals.

The great hammerhead is one of the most common species; usually they wander along slopes near the coast, both in shallow water and in depths approaching 275 m. Sometimes they swim near the shore and enter bays and estuaries, or places where fresh water from rivers and salt water are mixed. In summer, huge shoals, or groups of these sharks, emigrating from Ecuador, although some stay in the same place all their lives. These sharks live alone, in pairs or in groups, but when young always live in large groups.

The most striking feature of all species of hammerheads is the particular shape of the shaped head T, eyes and nostrils at the ends of the head, thanks to which head movement from side to ladoal swimming walking with all seen around and even left behind. 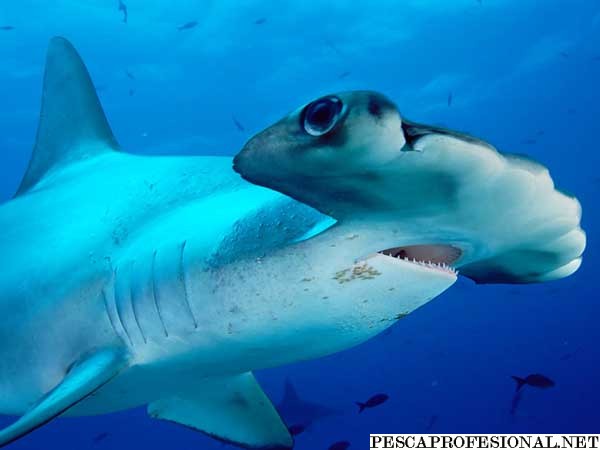 The flippers are located behind the gills, and the caudal fin have black tip. Almost all the dorsal side is gray or brown, but it becomes white near the ventral. Like most sharks, hammerheads exhibits countershading, that is to say, a dark color on the back and a light belly. Seen from below, hammerheads confused with the brightness of the surface waters; viewed from above, It confused with the dark seabed. Countershading is a kind of mimicry that allows the shark to surprise their prey.

The usual size is 3,7 m, but can reach 6 meters long and weighing nearly half a ton and are known for any attacks on humans, although these are rare.

No one knows exactly why these sharks have evolved with that peculiar form of head. Some biologists believe that gives them a sensory advantage for finding prey, while others believe it helps them buoyancy. His nose is able, by olfactory lobes increased telencephalic, detecting a drop of blood to a distance of one kilometer and a half. Hammerhead fins are particularly appreciated as food in East Asia, although finning of these and other sharks is now banned in several countries. 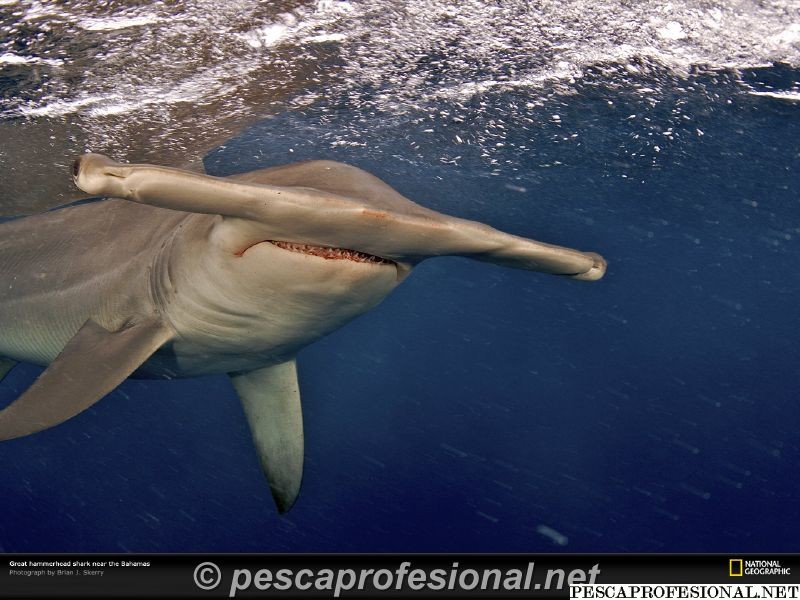 This shark feeds from a variety of animals, as eels, meros, lights, dolphin fish, other sharks, stripes, squids, crabs, snails, sepias e, even, poisonous scorpion fish. Hammerhead shark teeth are hook-shaped and are as sharp as a razor, which helps them catch, tear apart and devour its prey.

Hammerheads are ovoviviparous, that is to say, animals that give birth to live young. Sharks do not have placenta as mammals, but they have a uterus in which embryos develop in a single membrane. Embryos are attached to the yolk and extract nutrients until they hatch. Pups are born when they reach age or large enough to survive on their own. The gestation period lasts for at least eight months, but it can be extended up 16 months. The female has between 15 Y 31 pups per litter, which measured 42 a 55 cm in length at birth.