Shark or blue shark (Prionace glauca) It is a kind of elasmobranch carcarriniforme of Carcharhinidae.

It is a pelagic shark, cosmopolitan, which it is distributed through all oceans and seas of the world and receives different common names by location: tintorera name which also refers to the tiger shark- in Spain and Mexico, Caella or that en España, blue shark in Uruguay, Argentina, United States and United Kingdom, tile in Chile, and yoshikirizame in Japan. 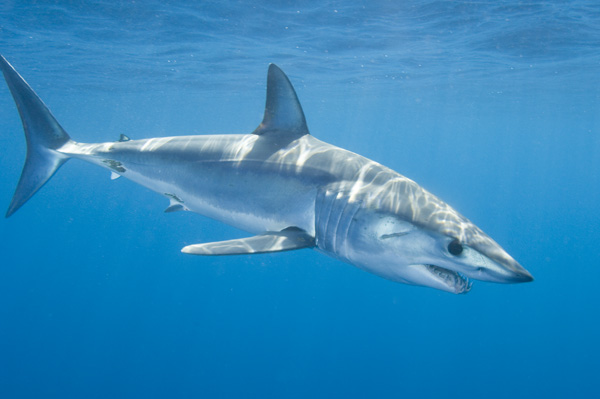 The shark is a shark slender body and elongated, with a long conical snout. She has big eyes, like all carcarriniformes, They are provided with a nictitating membrane, a sort of semitransparent eyelid that goes from top to bottom and protects the eyeballs when fighting with his prey. It has five gill slits, two dorsal fins, two pectoral fins, two anal fins and caudal. The flippers are long and slender, and the caudal fin is provided with an upper lobe also very elongated. It has a white coloration in the ventral, and a very intense metallic blue on the rest of the body. his teeth, they fall and are replaced constantly, are triangular with serrated edges. It has an average length of 2,5 m and weighing 80 kg, although there have been cases of adult females with greater lengths to 4 m and weighing up 220 kg. 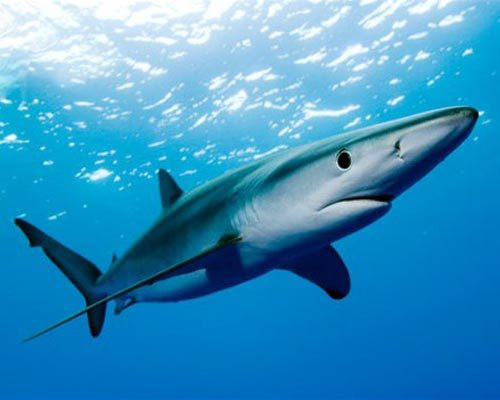 Notably particularity, given the length of his nose, his jaw has adapted smoothly to bite, since the upper jaw is able to project forward, so that no need to bite lift his head.

Their diet is basically fish as mackerel, herring, meros, jureles, beautiful, gadoids, squid and seabirds. You can be aggressive with humans. Usually hunt in pairs or small groups to help disperse the shoals. In their search for food you can travel great distances. It is estimated that can travel distances up 5.500 km. 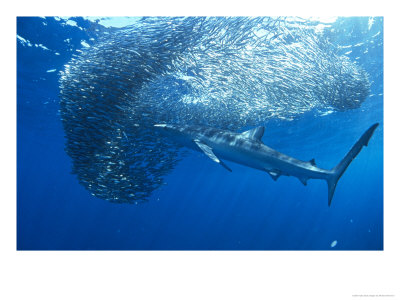 The shark is a viviparous fish. Sexual maturity occurs between 5 Y 6 years in females and 4 Y 5 in males. Fertilization takes place within the body of the female than the male fertilizes thanks to a special pair of pelvic fins calls pterigópodos. Females have two wombs instead of one, within which develop between 4 Y 135 young. Neonate tintoreras are approximately 40 cm long. As in other shark species livebearing, females lose their appetite shortly before giving birth to avoid eating their own children. Gestation lasts 9 Y 12 months. Sharks are completely independent at birth and instantly seek refuge from predators, including their own parents. Birth still have their yolk sac, an extension of his abdomen where their internal organs, and it is reabsorbed into the body shortly after.