The pike has a long cylindrical body almost. The relatively long head has a mouth looking duckbill and is open upwards. The dorsal fin relatively long size is very run back.

The color varies with habitat – the back is usually green-coffee, the color changes to lighter tones approaching the white belly. The jaws are provided with specialized teeth, like tongue and gill arches. Pike owns between 110 Y 130 small scales along the lateral line.

The average size is between about 50 cm. Y 1 metro. There are copies of up to half meters and weights up 25 kg . The maximum size mentioned above is normally only reached by the female, the male not reach more than 90 cm. 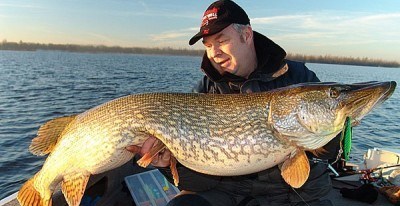 Pike is a fish habitat firm and likes to be near the shore in running water, lakes and large ponds. He prefers the edges with chamiza and other possibilities to hide,like logs, estate, rocks, bridges, vegetation… You need good quality water to thrive, and fresh water, stable water level, abundance of baitfish and abundance of vegetation.

It is found in most of the Iberian Peninsula, except in Galicia, with greater abundance in reservoirs Júcar, Castilian-Leonese rivers and Extremadura. It was introduced in the years 50 by ICONA for sport fishing, and it has been translocated to many places of the peninsula. Now a major threat to biodiversity conservation because of its impact on native fish fauna, as well as amphibians, reptiles linked to aquatic ecosystems and even avifauna.

This exotic species is considered invasive and is the subject of population control measures to try to reduce the negative impact of their presence in Iberian aquatic ecosystems.

Pikes feed on fish of all species and crabs; fry can eat their own kind. toads, birds and small mammals also belong to the spectrum of prey. Pike has a reputation of being a very aggressive predatory fish, even though he spends most of the time hidden among the vegetation and do not eat as much as fame he has it. Rarely they have been found including adults with birds in the digestive tract. Heinrich Engler described an extraordinary case in his monograph: only one pike 30 cm she had tried to swallow an adult male of a species of waterfowl having a length of 35 cm. The two animals, dead, They were found at a distance of 20 m water, the bird with head and neck inside the mouth pike. Obviously, the bird had managed to move to the mainland before both animals drowned there.