The coconut crab (Birgus robber) It is a decapod crustacean of the family Coenobitidae; It is the heaviest terrestrial arthropod known that there (the largest crab length Japanese giant crab). The coconut crab is a species of crab hermit whose characteristic ability is to open coconuts with its strong tweezers to feed with content. 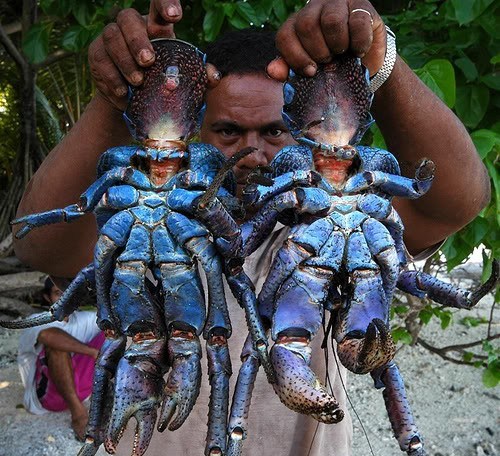 English receives the alternative name of robber crab or palm thief (“crab thief” O “palm thief”, respectively), while German is designated as Palmendieb. These names are due to his penchant for stealing shiny objects, as cutlery and metal containers and tents houses. In fact, the binomial name reflects this behavior (the Latin latro, “thief”).

It is called also “land hermit crab” for his habit, in times of molting, using the shell of small animals. This can be confusing, as it also applies to other species, as religious variable. 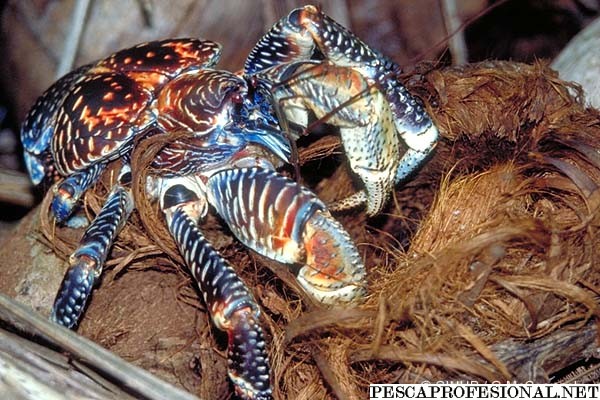 Coconut crab inhabits areas along the Indian Ocean and the western Pacific. The population and better conserved is on Christmas Island in the Indian Ocean, and there are significant populations in the Cook Islands in the Pacific Ocean, especially Pukapuka, Suwarrow, Mangaia, Takutea, Opportunity, Atiu, and Palmerston Island.

it is also found in the Seychelles, especially Aldabra, Glorioso islands, Astove Island, Assumption, and Cosmoledo, although it has been extinct in the Central Islands. It is known that also inhabits the Andamans, in the Bay of Bengal, and occasionally in the Society Islands where most notably Tahiti.

Exemplary of the different islands there are differences in color ranging from violet, purple and brown. Given that they can not swim adult, the cangejos must have colonized the islands as larvae. Nevertheless, Some researchers believe that the 28 instar days are not enough for some of these Colonizing migrations, and suppose that the crab can have reached distant islands on driftwood and flotsam.

The geographic distribution shows some empty zones, for example around Borneo, Indonesia or New Guinea. these islands, easily accessible to the crab and sustainable habitat, They have not yet population of the species. This is because they have been driven to extinction by human consumption. As an exception, there are crabs in the islands of Wakatobi National Park in Sulawesi, Indonesia. 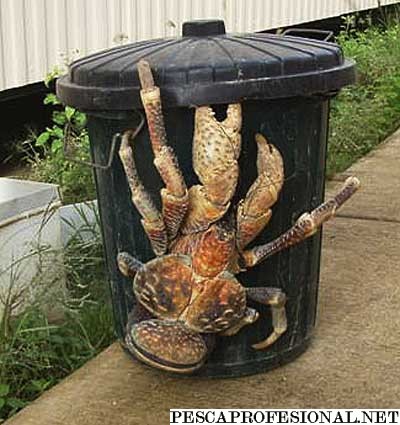 The coconut crab lives in burrows or crevices in the rocks, depending on the type of soil. Dig their own burrows in sand or soft soil. During the day the animal remains hidden to protect themselves from predators and reduce moisture loss by heat. While resting in its burrow animal closing the entrance with one of its claws to achieve the humid microclimate that need their respiratory organs.

In areas with large populations of crabs you can be seen some during the day, perhaps to take advantage of foraging. Rarely they leave their burrows if the day is humid or rainy, since these climatic conditions allow you to breathe easier. Lives exclusively in mainland, and copies have been sighted more than 6 km inland. 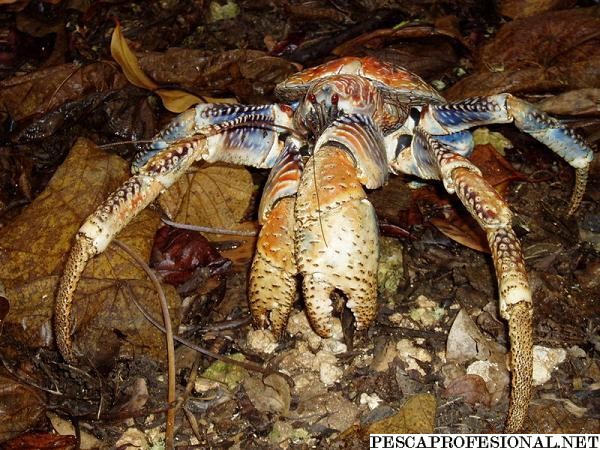 Reports on the size of the species differ, although most references estimate weighing more than 4 kg, body length 40 cm and size of legs of approximately 1 m[2] males being generally larger than females. It is estimated to be the theoretical size limit for a terrestrial arthropod; in the case of marine specimens, where the water helps support the weight, larger sizes are achieved, Kaempfer example being Macrocheira.

They exhibit longevity among 30 Y 60 years, considering that the references to it are varied. Bigus body latro, like all decapod, It is divided into a central section (cefalotórax) with 10 legs, and abdomen.

The first pair of legs is armed with large claws, that used to break coconuts with which it feeds, and further items up to 29 kg. The next pair of legs, as in all hermit crabs, powerful legs are used for walking, that they allow you to also climb the trunks of coconut trees, up to 6 m high. The fourth pair is smaller, with clamps at the ends used by the young to make the shell or a coconut shell as a protection; adults use them to walk and jump. The last pair of legs is very small and serves only to clean the breathing organs. These legs take usually within the shell, the cavity containing such organs.

Although the species is a derived type of hermit crabs, only the juveniles use snail shells or shells to protect their soft abdomen, and sometimes they use coconut shells with the same objective. Unlike other hermits, adult crabs do not use shells outside, but harden their abdominal armor with calcium deposits and keratin.

Another protection strategy is to double its tail under the abdomen, as most species of crabs. Hardened abdomen protects the animal, and reduces moisture loss, but it should be changed at regular intervals. Moulting takes approximately 30 days, during which the body of the crab is soft and vulnerable, so it remains hidden to protect.

In its adult stage, Coconut crab can not swim, and drowning in water. Breathing uses a special organ called brachial lung, which can be defined as an intermediate evolutionary stage between gills and lungs, and it is one of the most characteristic adaptations of the species to the ecosystem.

Another distinguishing organ of the crab is its nose. The process of smell operates differently if it is hydrophilic molecules in water or hydrophobic in the atmosphere. Like most crabs live in the water, have specialized organs called aestetas at its antennas to determine simultaneously the concentration and direction of an odor.

Nevertheless, as coconut crab lives on land, the aestetas their antennas differ significantly from those of other crabs, and more closely resemble the olfactory organs of insects, called Sensillum. Although insects and the crab come from different evolutionary patterns, the same need to detect smells in the air led to the development of organs remarkable similarity, in what constitutes a clear example of evolutionary convergence. Like insects, Coconut crab rapidly moving its antennae to improve their sense of smell. It has an excellent sense and can detect interesting odors over long distances; for example, the smell of roast, bananas and coconuts especially call your attention, as potential food sources. 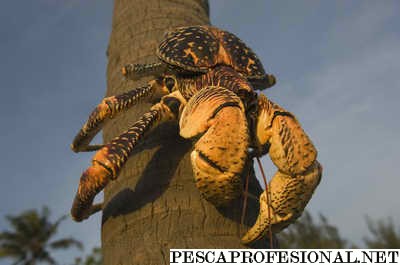 The coconut crab is paired rapidly and frequently on dry ground from May to September, especially in July and August. Male and female fight until the male achieves dump on its back female to mate; the whole process takes about 15 minutes. Shortly after, the female lays eggs and adheres under his abdomen, carrying fertilized eggs for a few months. At the time of hatching, usually from October to November, the female leaves the larvae (zoeas) in the sea at high tide. It has been documented that females do this all on the same night, Beach saturating animals.

Larvae float in the ocean during 28 days, during which a large number are eaten by predators. Then remain other 28 days in the sea and on the beach as hermit crabs, using as protective shells discarded by other animals. At this stage, sometimes they venture to the mainland, and-like hermit crabs- protection are changing as they grow. Cangreos young people who can not find a shell in disuse use pieces of coconut shell.

After these 28 days definitely leave the sea and lose their ability to breathe in water. Crabs reach reproductive maturity between 4 Y 8 year old, one of the longest periods between the crustaceans.