It's kind of decapod malacostráceo family of astácidos extending from the Balkan Peninsula to the Iberian and reaches the British Isles, where it is the most densely populated. 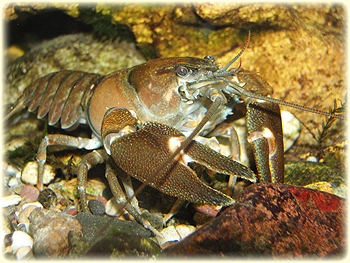 The dramatic disappearance has suffered this kind of crab is mainly due to the devastating epidemic of "plague Crab" or aphanomycosis, coupled with habitat loss, contamination and introduction of exotic species. 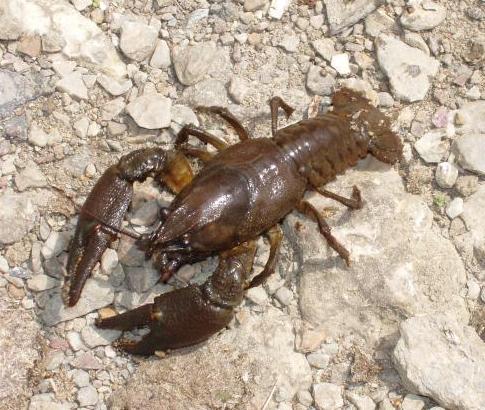 Reaches a size of about 11 cm y 80 grams. It is distributed in waters with a calcium content throughout Southern and Western Europe.

Spain was located in virtually all peninsular river basins, especially in the northern half.

Inhabits clean water with high calcium content, with optimum temperatures ranging between 15ºC – 20ºC,preferably not very large beds channels and rich in organic matter and well forested banks,It is also located in areas with low speed water flow, with variable nature funds, although more often it prefers gravel funds. It is an animal that runs away from light and therefore hidden among the vegetation, in holes dug into the slopes of the banks and under stones. As a result most activity unfolds at night and remains active from spring to autumn, the rest of the year hibernating in their favorite hideouts.

It feeds on plant and animal organic matter, macroinvertebrados e, even, fish fry and larvae of amphibians.

Copulations take place between October-November and putting up 160 eggs, keeping the female under the abdomen, It takes place at the 10-15 days, producing hatching in spring.

Young people suffer several changes in the first months of his life and adults molt twice a year.

Its main cause of extinction is the lethal disease known as aphanomycosis, produced by a fungus transmitted by the species of crabs alóctonos.

Only isolated populations in headwater remain, places where the disease has not reached.

The introduction of exotic species of crab is fatal for our common river crab. Their main enemy is the American red crab (Procambarus clarkii), widely distributed in Aragon. Recently also they have been introduced the signal crab (Pacifastacus leniusculus) and an Australian crab, the yabbie (Cherax destructor). These unauthorized introductions are very harmful and can be sanctioned.

One thought on “RIO JOINT CRAB”