Procambarus clarkii is a decapod crustacean of the family Cambaridae. It is a crayfish, Native to southeastern United States, but can be found on other continents, which it is often an invasive species. In Spain it is often referred to with the common name of American crab or American crayfish.

The zone of origin of P. clarkii is the Gulf of Mexico from the United States from northern Mexico to Florida and inland through southern Illinois and Ohio. It has also sometimes been deliberately introduced outside its area of ​​origin and countries of Asia, Africa, Europe and elsewhere in the Americas. In northern Europe populations are maintained but not expanded, but in southern Europe, P. clarkii is expanding and colonizing new territories and displacing native crayfish Astacus astacus , Austropotamobius spp.. Spain has displaced many waterways Iberian river crab (Austropotamobius pallipes lusitanicus).

Some individuals are proven capable of crossing some kilometers of land relatively dry, especially in humid seasons, although the aquarium trade and anglers may have hastened the spread in some areas (it is believed that fishermen using P. clarkii as bait introduced it in the US state of Washington). Attempts have also been made to use P. clarkii as a means one of biocontrol organisms, to reduce snail populations involved in the life cycle of schistosomiasis, so the introduction of P favors. clarkii, for example in Kenya.

P. clarkii is normally in not too cold waters, as slow-flowing rivers, marismas, ponds, irrigation systems and rice fields. It is considered the species in the order Decapoda with greater ability to adapt to different ecosystems. It is able to grow rapidly in seasonal water sites, It can tolerate dry periods over four months. P. clarkii grows rapidly and can reach weights of more than 50 g, and sizes 12 cm long.

It is also able to tolerate some salt water, which is unusual in crayfish. The average life of Procambarus clarkii is five years. We know of individuals who have achieved more than six years in the wild. Their feeding omnivorous, You can eat both plant and other animals and even carrion.

The rapid growth and high adaptability of P. clarkii industry has facilitated this crawfish in Louisiana, with earnings of millions of dollars annually, and more than 500 km² crop species. P. clarkii makes up the vast majority of the production of crayfish in the United States and other countries. P. clarkii has also been introduced for breeding in different countries such as in Spain, where his success is attributed to its ability to colonize disturbed habitats that would be unfeasible for native crayfish. P. also clarkii is bred for use in teaching and research.

They are living in waters with dissolved salts limestones, necessary to produce its shell. They have crepuscular habits and rest during the day and night center.

They feed on any organic matter, even carrion. They have many predators throughout his life: insects, fishes, birds and mammals, such as otter. 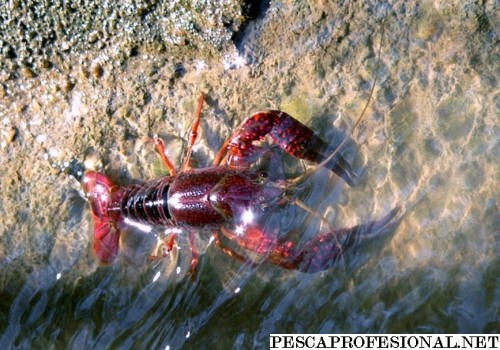 From the first week of life, crabs shed their shells as do all arthropods and is then easy prey for predators. Therefore at that time he stands still and hidden until he regains his armor. He can live 20 years or more. This crab ended our crayfish whose meat was highly appreciated and whose fishing posed to the region an activity of great economic importance. 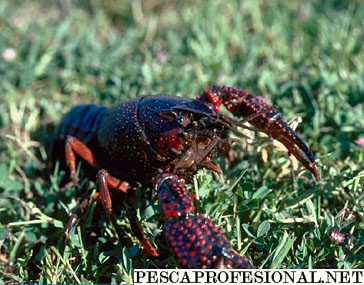 Crayfish have a more elongated external morphology than other crabs, which makes them like small lobsters.

They consist of a carapace with 5 pairs of legs, the first pair feeding rapier, and abdomen with "false legs" (pleopods).

Crayfish, like other arthropods, move the exoskeleton and if they are in latitudes as the Mediterranean overwinter for a few months.

Copulation is preceded by a fight, sometimes with fatal injuries, between the male, It is having grippers, and female. When the male gets knock down the female expels the semen from the base of the prolegs (pleopods) abdomen. In the Iberian river crab egg fertilization occurs one month after copulation.

P. clarkii is a large excavator and this work can damage the course of rivers and crops, particularly in rice, and your eating habits can alter native ecosystems. You can compete and displace native crayfish, and is vector astaci Aphanomyces fungus that causes extensive damage to native crabs. It is also virus vector crayfish and various parasitic worms vertebrate. 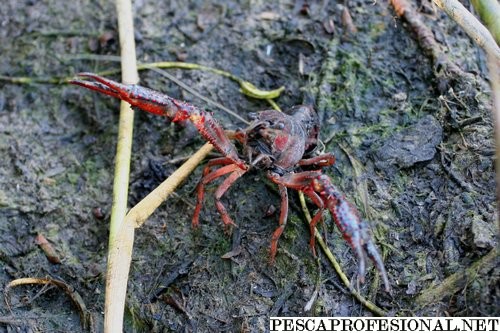 In Spain P. clarkii has displaced the native crayfish (Austropotamobius pallipes lusitanicus) in almost all watercourses, this being only in the higher grades where the water is colder rivers of Castilla León, Basque Country, La Rioja and other northern regions, so it is considered an invasive species.

In areas where we have introduced have been observed amphibian declines since both consume eggs as individuals no adults.