LAKE SUPERIOR LAKE SUPERIOR OR IS THE GREATEST OF NORTH AMERICAN GREAT LAKES,SHARED BY UNITED STATES AND CANADA.

INDIANS OJIBWA called it GICHIGAMI, WHAT DOES IT MEAN ” BIG WATER “. 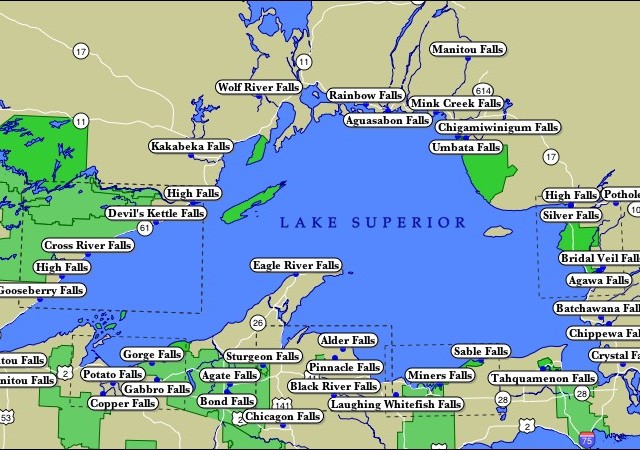 It is the largest freshwater lake in the world by surface, Although the lake Baikal in Siberia has more water. Lake Superior has a surface 82.000 km² -More than that of the Czech Republic, maximum length 563 km and a maximum width of 257 km. Its average depth is 149 m, It is the maximum of 406 m. Lake Superior contains 12.232 km³ water and coastline is 4.393 km (including the islands).

The average temperature of the lake during the summer is 40 ° F (4.4 ° C).Lake Superior is the largest, deepest and coldest of the Great Lakes. Lake Superior could contain the volume of all the other Great Lakes and three more like Lake Erie.

Storm on Lake Superior waves give over record 20 pies (6 m). And there have been waves over 30 pies (9 meters).

America Oceanographer J. Val Klump was the first person to reach the depths of Lake Superior 30 July 1985, as part of a scientific expedition, what, a 733 pies (223 m) below sea level, is the lowest point in the continental inside the United States and the second lowest within North America after the continent much deeper Great Slave Lake in Canada (458 meters (1.503 pies) below sea level). (Although Crater Lake, not Lake Superior, It is the deepest lake in the United States, Lake surface elevation of the crater is much higher and its deepest point is 4.229 pies (1.289 m) above sea level.)

The lake is part of the international border: to the north, the Canadian province of Ontario; and south, the US states of Minnesota, Wisconsin and Michigan. It is a major route for transporting metals and supports a heavy boat traffic, especially lakers, a type of long, narrow boat used to transport iron from the region of Lake Superior to Lake Erie port cities. 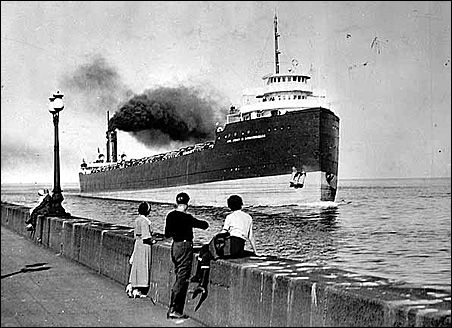 The largest island in Lake Superior is Isle Royale in Michigan. Isle Royale contains several lakes, some of which also contain islands. Other famous islands include large Madeline Island in the state of Wisconsin and Michipicoten Island in the province of Ontario. 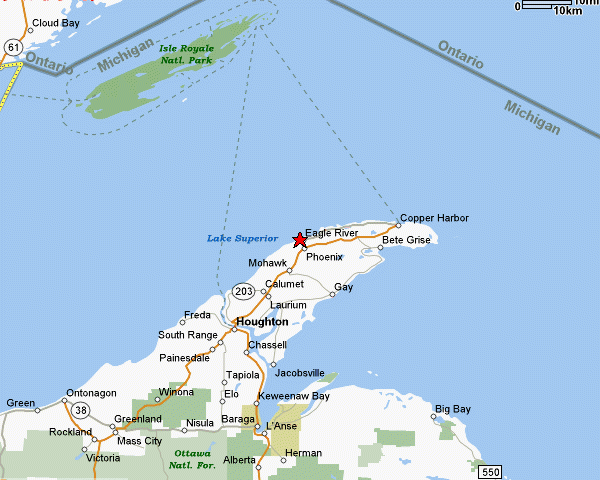 The largest cities in Lake Superior are: the twin ports Duluth, Minnesota, and Superior, Wisconsin, Thunder Bay, Ontario, Marquette, Michigan, and the twin cities of Sault Ste. Marie, Michigan, y Sault Ste. Marie, Ontario. Duluth, at the western end of Lake Superior, It is the innermost point of the St. Lawrence and the largest inland port in the world.

The Ojibwe called Lake Gichigami, what does it mean “large water”. Henry Wadsworth Longfellow wrote the name as “Gitche Gumee” in The Song of Hiawatha, like Gordon Lightfoot in his song, “The wreck of the Edmund Fitzgerald”. 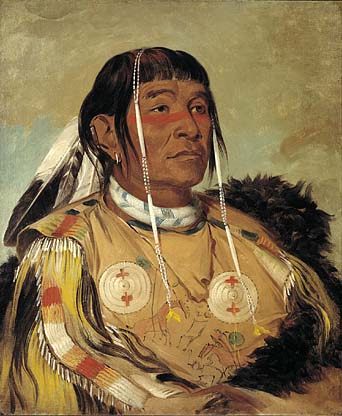 The first French exploreadores approached the great inland sea, across the Ottawa River and Lake Huron during the century 17 It refers to its discovery as -le-lac superieur. Correctly translated, expression means “lake Alto”, that is to say, Lake over Lake Huron. The lake was also called Lac Tracy before siglo17 by Jesuit missionaries. Englishmen, to take control of the region in the early 1760, after the French and Indian War, They gave him the name of Superior”, due to be superior in magnitude to any of the lakes in this vast continent

The first people arrived in the region of Lake Superior ago 10.000 years after the retreat of glaciers in the last Ice Age. They are known as the Plano, and used stone-tipped spears to hunt caribou on the northwest side of Lake Minong.

This documented that the nearest tribes known as the Shield Archaic (c. 5000-500 aC). Evidence of this culture can be found in the eastern and western ends of the Canadian coast. They used bows and arrows, canoes, fishing, copper mines and tools for hunting, weapons, and they traded with established networks.

It is believed that were the direct ancestors of the Ojibwe and Cree.

The town of Laurel (c. 500 to that 500 dC) They developed the seine fishing, The evidence is found in the Upper around rivers like the Pic and Michipicoten.

Another culture known as the Indian Forest Terminal (900 a 1650 dC) Has been found. They were Algonquian people hunted, fished and gathered berries. They used snowshoes, birch bark canoes and garden or conical dome. At the mouth of the Michipicoten River, nine layers of camps have been discovered. Most Pukaskwa Pits were probably made during this time.

Anishinaabe, also it is known as the Ojibwe or Chippewa, They have inhabited the Lake Superior region for over 500 years and were preceded by Dakota, Fox, Menominee, Nipigon, Gros Ventre there Noquet. It is called Lake Superior Anishnaabe Gichgamiing, O “Ojibwe de Mar”. After the arrival of Europeans, Anishinaabe were given to the intermediaries between the French fur traders and other indigenous peoples. He soon became the dominant Indian nation in the region, They forced the Sioux and Fox and won a victory against the Iroquois west of Sault Ste. Marie 1662. By mid-century-18a, the Ojibwe occupied all the shores of Lake Superior. 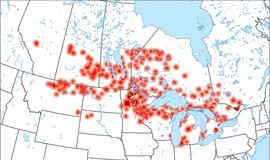 Rebuilt Great Hall, Grand Portage National Monument, MinnesotaEn the century 18, the fur trade in the region was booming, with the Hudson's Bay Company has a virtual monopoly. In 1783, Nevertheless, the North West Company was formed to compete in the Hudson Bay Company. The North West Company built forts on Lake Superior in Grand Portage, Nipigon, Pico River, Río Michipicoten y Sault Ste. Marie. But for 1821, the companies merged.

Many towns around the lake are miners or live everything related, as processing or shipping. Nowadays, Tourism is another major industry, the sparsely populated Lake Superior , with its rugged coastline and desert, attracts tourists and adventurers.

Lake Superior has fewer nutrients dissolved in relation to its volume of water compared to the other Great Lakes and so is less productive in terms of fish stocks and is an oligotrophic lake. This is the result of poorly developed soils found in relatively small basin. Nevertheless, nitrate concentrations in the lake have been steadily increasing for more than a century. They remain well below levels considered dangerous to human health, but this, long term increase constantly a rare record nitrogen accumulation environmental. It may be related to alterations anthropogenic nitrogen cycle, but researchers are still not sure what causes this change in the ecology of the lake.

With enough to hold the combined water in the other Great Lakes deep and as large as the state of South Carolina area, the size of Lake Superior has given an image of invulnerability.

Nevertheless, It is losing water and getting warmer, which he has aroused fears among residents living near its banks, as well as scientists and companies that have the lake as a source of business.

The changes in the lake could be signs of climate change, although scientists are not sure why.

The level of Lake Superior is at its lowest point the past eight decades and could impose a new brand in the coming weeks if it comes down other 7,6 centimeters (three inches), as anticipated.

While, the average lake water temperature has risen by two degrees Celsius (4,5 Fahrenheit) since 1979, a figure significantly higher than a little more than one degree Celsius (2,7 Fahrenheit) increase in air temperature in the region during the same period.

This is not normal for a freshwater sea that was created when a glacier melt by the end of the Ice Age and remains cold in all seasons business.

A meteorological instrument installed on the west side of the lake recently recorded a temperature “surprising” from 24 degrees Celsius (75 Fahrenheit), “the warmer surface we've ever seen in this lake”, said Jay Austin, an assistant professor at the University of Minnesota who works in the Great Lakes Observatory in Duluth.

Water levels have also fallen in the other Great Lakes since the end of the decade 1990. Nevertheless, the suddenness and serious changes in Lake Superior arouse the fears of many people in the region.

The coasts are tens of meters wider than they used to be, which gives bathers wider beaches, but also it exposes them to funds with dirt and vegetation in a state of putrefaction.

On a recent day, Dan Arsenault, a man of 32 years he has lived all his life in Sault Ste. Marie, in the Upper Peninsula of Michigan, He watched his two young daughters playing in the mud on the southeastern coast where it just a few years ago the water was at waist. A floating rope before marking the swimming area now rests on moist soil.

Nevertheless, Lake Superior still has plenty of water. Its average depth is 147 meters (483 pies) and reaches the 405 meters (1.332 pies) at its deepest point.

Nevertheless, on the shores of Lake Superior, boats can not reach many docks where dock and have asked the Corps of Engineers US Army to dredge the shallow bays.

While, ferry service between Grand Portage, in Minnesota and Isle Royale National Park has lost operations and customers because one of its ships can not dock at the pier.

Sally Zabelka has fired boaters who wish to dock at the pier Chippewa Landing in Upper Peninsula, where not long boats up to eight meters (27 pies) in length they could enter the channel from the Brimley Bay. “essentially, our dock is useless this year”, he added.

Another problem represents fishing, because when heated the water, perch and other fish species that had attracted sport fishermen off the coast, They have now migrated to colder waters in the open lake.

Meanwhile, the retired worker Ted Sietsema voiced a suspicion not uncommon among the people of the southern shore of Lake Superior: the government is diverting the water to places with more population and political influence, as to the Huron and Michigan lakes and even to other regions across the Mississippi River.

“I do not say that global warming. That water sent west. That huge aquifer is empty, but still you can irrigate the desert and that water has to come from somewhere”, Sietsema said.

But that theory has no basis, said Scott Thieme, a director of hydraulics and hydrology office Corps of Engineers, Detroit District.

The water comes from Lake Superior through gates, hydroelectric plants and locks into the river St. Marys, but their amounts are strictly regulated by an agreement signed in 1909 with Canada.

The forces that are operating in these phenomena, although still a mystery, are not elements of a spy novel, Thieme explained.

Rainfall was almost 15 centimeters (six inches) below normal in Lake Superior last year, and evaporation has increased because not so cold winters have decreased the ice in winter.