EL CATFISH, Silurus glanis IS YOUR NAME SCIENTIFIC, It IS THE LARGEST FISH OF THE INLAND WATERS OF EUROPE, IN OTHER LANGUAGES WALLER,WELS CATFISH,SUM,CAT-FISH,WITH,CATFISH,CATFISH,AS,TRUNK,EUROPEAN CATFISH. 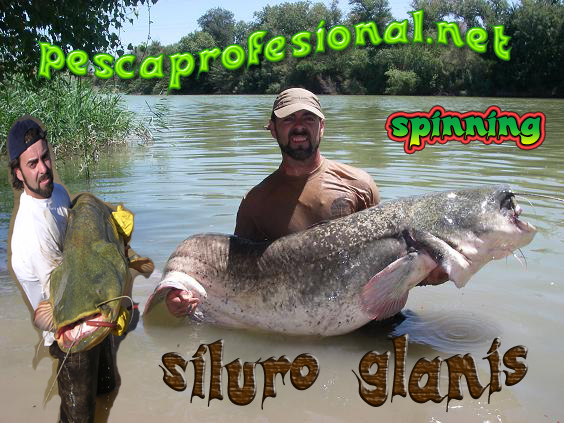 HE TORPEDO It BELONGS TO THE ORDER OF SILURIFORMES, FAMILY SILURIDAE.Los fish of the order Siluriformes, whose common name is catfish, They are some 2.200 species, of which 1.200 They are living in South America, where it is also called bagres. Two families are primarily marine, the rest live in freshwater. Most cats are nocturnal scavengers and fish living near the bottom of the sea, in shallow water.

INSIDE THE ORDER OF THE Silurus glanis SILURIFORMES IS THE BIGGEST SECOND, Only to catfish MEKONG ( Pangasianodon gigas ) ALTHOUGH THIS BELONGS TO THE FAMILY ( PANGASIIDAE ), And not the ( SILURIDAE )

As for the size of catfish, there is much uncertainty, It is much different information, It is said to reach 5m and 300kg, Other 3m 200kg, but in my personal opinion I still have not seen any picture, I can say that catfish weighing more than 150kg to,both the river Ebro and the po in Italy larger sizes that have taken, They are a little above 2.50 m and 115 kg de peso de media.

By this I do not mean, that there are bigger but so far are the biggest I know some references.

Originally from river systems flowing into the North, Baltic, Negro, Caspian and Aral seas and thus was originally distributed throughout most of Eastern Europe to East Germany through Poland, Finland, to southern Sweden, to southern Turkey and northern Iran through Russian Baltic States, Kazakhstan and Uzbekistan.

The catfish was introduced into the Rhone River, southern France and southern Britain during the century 19 and it has since been widely established throughout western and southern Europe. Although these introductions were for aquaculture purposes or sport fishing, Fossil records indicate that, in some cases (Netherlands, Belgium, France), the species has been returned to parts of their former range. The population of Italy (Po) and Spain (Ebro), in particular, grow very large among anglers regularly land samples with a higher weight 75 kg. It has also been introduced and become established in Lake Balkhash endorreico, and presumably its tributaries, Kazakhstan.

It also occurs in the rivers Maritsa, Struma and Sperchios in Bulgaria, Greece and Turkey, all of which flow into the Aegean Sea, but they represent the only natural part of its distribution area Mediterranean.

Catfish feeds on all kinds of prey and carrion. In the juvenile phase eats small invertebrates background and adult eats mostly fish like carp, barbos,zander mainly bonefish in order any fish that is in your area including even comiendose, but also other animals, like ducks, rodents, snakes,frogs, crabs ..., to which suction traps with his big mouth.

As expected the catfish are goldfishes murky waters, active in the dark, prey detected by sight, but it does so mainly through other senses. It has electroreceptors in barbels which also have function táctil-, jaw line and side-a sensitive organ to vibraciones-, and chemoreceptors (sense of taste) in sensory whiskers, in the mouth and other body parts. further, It has a good nose and a fine ear that allows it to detect sounds well produced out of water. Danube fishermen attract him banging on the surface of the water with a kind of stick called clonk and is attracted by the low frequency sound waves. It remains very active in winter, hidden in the background, and fed very little.

He torpedo overwinters in the channels of the deepest rivers and migration is done spawning grounds upstream from February to April, depending on location. Mating males and females occurs during migration and spawning occurs later, May to August in vegetation, wetlands and marginal areas of the lakes, flood plains and river deltas. The eggs are coated with an adhesive, as gelatin and membrane 10 ~ – 350000 It can be deposited over a single spawning event.

Catfish spawning, usually it occurs on warm evenings characterized by a decrease in barometric pressure, for example, before a storm. Males have an increased aggressiveness and compete for nesting sites in shallow waters around 40-60cm deep. Once a space is established each male builds a nest, which can be in a depression in the substrate, vegetation or flattened area between hanging / plant roots submerged.

The event itself is preceded by the male chases his companion, nudging ventral region before wrapping around and then the pair sinks into the substrate and releases a lot of female eggs and male follows fertilising eggs . This process is repeated for a variable period of time until the female leaves the site.

Since the introduction of catfish in the reservoir of Mequinenza in 1974 – It has spread elsewhere in the basin Ebro, along the Ebro River and its tributaries, especially the river Segre. It has also been the subject of illegal introductions carried out by individuals in other rivers, reservoirs and lakes in Spain.

Catfish fishing can be done in various ways, a spinning or jigging with artificial lures, Bolla thoroughly or with all types of bait, as live or dead bait fishing and pellets is really booming in recent years cojido.