Thenor the biggest fish in the world, Mekong giant catfish, like this on the boat of a fisherman, You can reach 10 pies (3 meters) long and weigh up 650 pounds (300 kg). This critically endangered species has suffered from overfishing, damming, and habitat destruction.

Average life expectancy in the wild: More of 60 years

Did you know? Fish largest freshwater ever recorded was a Mekong giant catfish caught in northern Thailand 2005. It was almost nine feet long (2,7 meters) and weighed 646 pounds (293 kg). 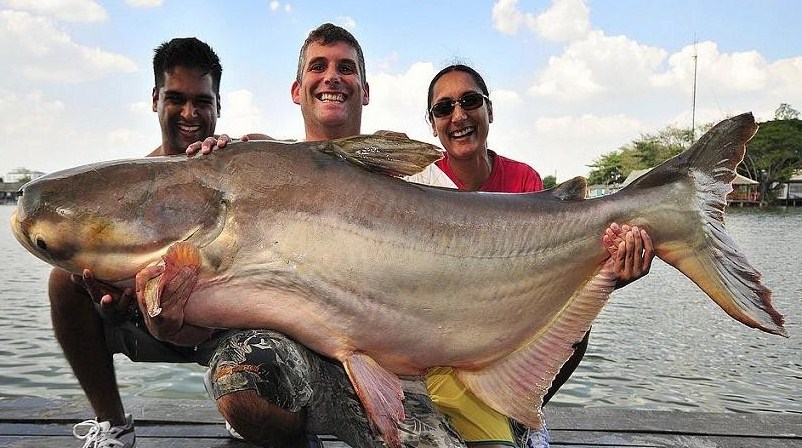 Figures protection: in danger of extinction.

One of the biggest fish in the world scaleless freshwater,living a precarious existence in the murky brown waters of the Mekong in Southeast Asia. Able to reach an almost mythical 10 pies (3 meters) long and 650 pounds (295 kg), Mekong giant catfish, They live mainly in the lower half of the Mekong River Basin, in Cambodia, Laos, Thailand and Vietnam. 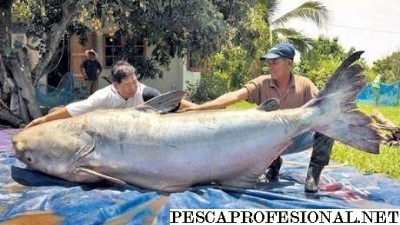 They were once plentiful throughout the Mekong Basin, population numbers have been reduced 95 percent over the past century, and critically endangered giant now teeters on the brink of extinction. Overfishing is the main culprit for the decline of the giant catfish, but the stagnation of the tributaries of the Mekong, the destruction of spawning and breeding, and sedimentation have had an enormous cost. Some experts think that can only be a few hundred adults. 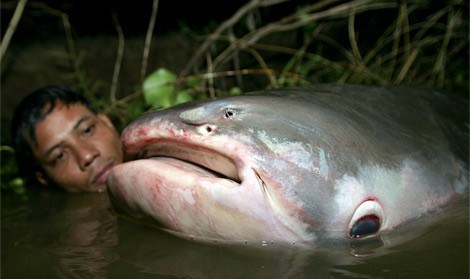 The Mekong giant catfish have eyes located very low and are silver to dark gray in the upper part whitish to yellow at the bottom. They are herbivores toothless living plants and algae in the river.
They are highly migratory creatures, giant catfish require large tracts of the river for their seasonal movements and specific environmental conditions in their spawning and nursery areas,mainly in the Tonle Sap lake in Cambodia and the migration of hundreds of kilometers north of the spawning grounds in Thailand. Dams and human encroachment, Nevertheless, They have seriously disrupted their life cycle.

International efforts are underway to save the species. It is now illegal in Thailand, Laos and Cambodia gigante.Y Catfish recently in Thailand, a group of fishermen agreed to stop catching giant catfish.