As you know, vinyls range, It is very wide, for all species, in its various forms of fishing.

Here you can see, some of the most used for catfish, as can be:
PIKIES,GRUBS,SANDRAS etc….. 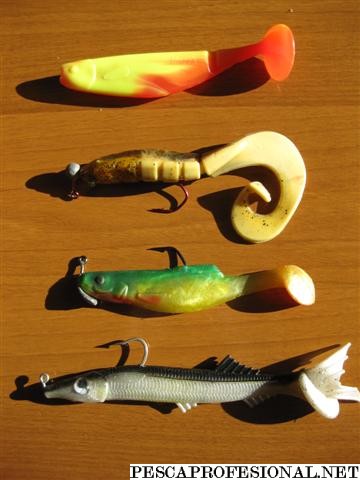 Due to the appearance of catfish, you can verify that your vision is not his strong point,regardless of size, his eyes are really small with the rest of your body, This means we say that this sensory organ, a third plane passes.

Therefore we should not worry, both when choosing a color, for our lures, simply search the contrast, depending on the hue of the water,the colors most commonly used are the : AMARILLOS,ORANGES,VERDES,BLACK AND WHITE in all combinations.

BUT NOW THAT THIS IS NOT SAY HOS OS COMA HEAD ( over time along many Probatino, and you will see that this is not an important factor ).

We have not to say, this is one of the strengths of catfish because it is able to detect certain odors, great distances, released but we can not work with this advantage, although we have at disposal, all the various odors attractants, to wet our vinyls.

This plane enters, in other sections,as could be:
PELLETS OR FISHING SQUID.

If there is anything that stands in the great catfish head, They are mostly mustaches, ( there must be a reason ).
Catfish mainly due to its size,It has had to specialize in other hunting techniques, since the rest of the fish, through the vision, as easily detected under normal water.
That's why he has developed his whiskers, as its lateral sensory organs that cross your body from head to tail, capable both categories, detect minor vibrations, even knowing, if a dam, It has difficulty,as when locating, to plan his attack.

PAGING their prey when they swim at the surface, attacking them from down like basses,acechandolas mud beaches, when the tents are desobando and are more debilitated,as lurking in the most areas of the river profundasa, He is hoping to pass alcanze a possible prey.

WHEN go hunting, ONE OF THESE BIG FISH,

The only advantage that we can have, is choosing our vinyls, because when working, daran results depending on the quality of those who are echos.

We must always seek, a soft vinyl testura, quality, que sean capable of transmitting, all possible vibrations, what will be, what really,It is able to detect catfish.

Independently, sizes we want to use, We have to keep in mind, the fishing area where we are, that according to that eligamos, If you have a large fishing pressure, Have to know, the bullheads, even if they have small eyes and big mustaches,'APRENDEN¡¡.

Typically used vinyls 15 cm to 18cm because of its size devido emit a large vibrations.
But because of its great fishing pressure, They can get to assimilate, certain vibrations as may be, Great VINILOS, as rattles the CRANBAITS.

So, We have to use, vinyl smaller size, worth us 10 cm, with hooks plomeados as a 5.0, asegurandonos on, all of which they have sufficient hardness, not to bend, when they, Catfish in the teeth.
In turn we have to take into account, the diameter of the line we use,because depending on it, we can make longer and with less vibration sets that can come to recognize.

ADVICE: You can add to your vinyls, a rattling,which they are little tubes with balls inside, emitting vibrations, and insert, vinyl in the body or tail of this. 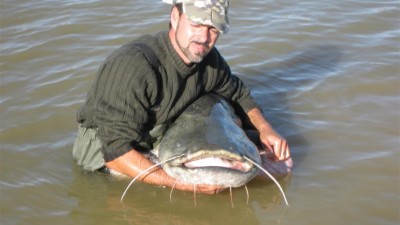 When using your vinyls, you have to take into account the plomeado the hook and adapt to the area pesqueis, small weights 8 a 12 g for beaches and shallow areas 12g and 20g for work cut, pozas, must leave the vinyl down to the bottom, before starting the collection.

When pesqueis in shallow areas, to avoid further hitches, you can work with raised cane, always without actually putting it totally straight,to keep the tour, when nailed to the ground.

WHENEVER THE LURE WATER FALL HAS TO BE IN LINE TENSION

Thus avoid, fail chopped,as bait gets catfish, in most occasions, nothing but fall into the water or in the first meter collection.
AVOID COMBAS.

The most used, It is a slow continuous collection without involving impulses to our decoy provided below for tour cane when nailing.

Sawtooth, This form is simply, give our well-cane upwards movements as side, so that our lure rise and then fall background, if we maintain, a small pause, to start again.

IMPORTANT: Our hooks must always be perfectly sharp, if not, not slothful, TO CHANGE, because this is the reason, failing many bites,because if they enter the inner side or mouth catfish is not a problem, because it is soft and hook penetrates quickly, but if we play with his teeth, It's a tough area, difficult to nail.

NAIL ALWAYS STRONGLY FEARLESS
worth more, vinyl losing an obstacle, to lose catfish.
THE NAIL TO DOUBT AND Spiking if you notice that the pull has not been strong, worth more than it will release the first, which carry a dive while and then lose.

CANAS: Si we fished from boats, the most used are, from 2m to 2.40m
length I personally like 2m.
And if we choose a total power of a stretch rods.
The important thing is that the reeds bend well and have no locking point throughout its stretch.
The action, cane is very personal, It depends mainly on lures us to go to use, from embarcaccion, with 50 a 100 It is more than enough.
We have to keep in mind, that thrown throughout the day, They weigh and wrists suffer especially not seek to take away cudgels precision in sets and crush you.

from shore, we can go to 2m 2.70 here it is better, a little longer, to have more power in the released and go further. 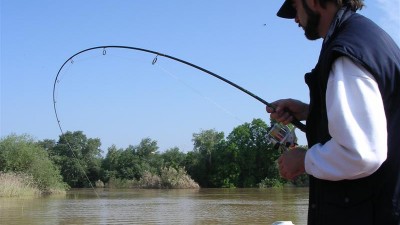 REELS: from boat, It is customary for a size 3000 to 4000 as they have sufficient capacity, to cram, about a hundred meters from a twisted 0.30 and especially low weight. ( here if I advise, that anybody hos some more money, looking for a medium or high quality as the brakes suffer a lot,also bearing guidewire ) They must be able, to curb torn from these, ebro locomotives.

from shore, we were going de la talla 5000 to 6000 because although weighing more, They have more yarn filling capacity, surely we will take, ( at the start, after the bite) because we can not take over Catfish, as it is done from vessel.

THE SECRETS OF FISHING FOR ALL SPECIES ARE :

KNOW THE LACK OF FISH:

Studying what their preferred areas, depending on the season in which we are.

Have faith in the lures we use, fishing, quietly no hurries.
Always try to catch as thin as possible, both diameter lines and hooks.

THROW, THROW,THROW…. you have to comb the terrain,that through insistence, is what eventually, We will make the difference, the fishing, that NO.

And before, The doubts,do not hesitate to try, your whole repertoire.
ALWAYS WITH FAITH AND unhurried.

I hope this short article SEA OF YOUR HELP

In the next article, I speak of spoons and various mounts, that you can do, yourselves. 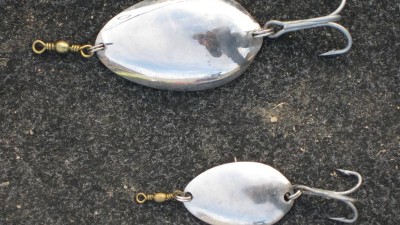 A SALUTE TO FRIENDS PESCAPROFESIONAL.

4 thoughts on “CATFISH AND VINILOS”