Lthe Surubí (Pseudoplatystoma spp.) They are a kind of zoo siluriformes freshwater fish of the family of pimelodids, Sur.Apreciados natives of America for its gastronomic value, They have been decimated by fishing in recent years, and by altering their habitat due to the construction of hydroelectric. 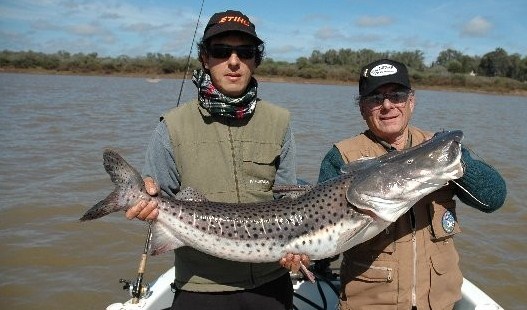 They are large predators, feeding mainly on juveniles of other species. Like other siluriformes, They have smooth skin, and show three distinct pairs of chins, two along the chin and one, of considerable length, next to the maxilla.

For any fisherman who can afford any of these great rivers are excellent fishing excenarios to capture the Surubi,the Golden, Trvirs O Grandes bogus.

Uruguay River is clearer and cleaner than his brother Paraná. Its white sand background, toscas Coloradas and large scree make their waters appear free of sediment, and then prove ideal for the use of artificial lures.

Parana River (Guarani father of waters) muddies the waters under the province of Misiones. As the river flows through the correntina coast and the shores of neighboring Paraguay, receives large amounts of sediment stream, brooks and rivers that not only turn their great river turbidity, but also as schools of forage species mojarras, dentudos and bagres, they constitute the main diet of large predatory.

The surubis as good predators are, you can fish both baits and artificial vibos, Fly specialty in all its forms, Each day has more fans because of how spectacular their fishing.

Within flies, They are dry, which they are working on the water surface, imitating adult insects or insects that have fallen into water.

Also they appear wet flies, working underwater, imitating different states of insects before becoming adults and reach the surface. And finally, shown! streamers, They are imitating small fry or fish that are attacked by the other fish.