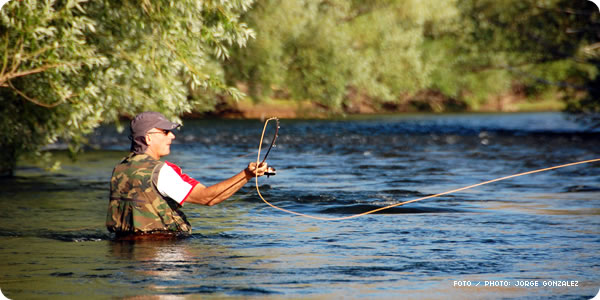 Fly fishing (fly fishing, in English) It is a fishing method that uses a cane and artificial decoy called “Moscow”. Fly fishing is usually practiced in lakes and rivers, although you can also perform sea. Also it is known as rat tail fishing.

The first mentions of fly fishing, cited in ancient Oriental writings, apparently back 2000 years B.C., during the Shang Dynasty where the use of artificial flies mentioned to catch fish.

However it seems that it is universally accepted that the origins lie in Macedonia, in the second century B.C., where a writer named Claudius Ealian, who lived between the years 230 Y 170 tells: “… I heard the way it is fished in Macedonia and is as follows:… between Baroca and Tasalonica runs a river called Astracus and in it there are fish skin dappled, these fish feed of certain insects which are peculiar place on the river flit, when one of these fish realizes the insect, is situated below it and nothing slowly to the water surface and traps the same way that a wolf wearing a sheep farm. Fishermen not use these animals as bait, because when they are caught, lose color and wings, therefore they cease to be attractive as food. then wrap, a hook in red wool and added two white rooster feathers. His cane is two meters long and the line of the same length. Throw this contrivance into the water and the fish bites being captive.”

It is known that in the early thirteenth century, German texts mention fishing for trout and grayling using a “feathered hook”. Other texts from 1360, identify fly fishing as the method chosen by the townsfolk, over a vast area stretching from the Swiss plains to what was Syria.

At least, there are a dozen ancient manuscripts documenting fly fishing in Britain in the fourteenth and fifteenth centuries, but none of these texts describe the techniques used, but merely a reference to this type of fishing practiced in relatively large scale and with certain level of sophistication. 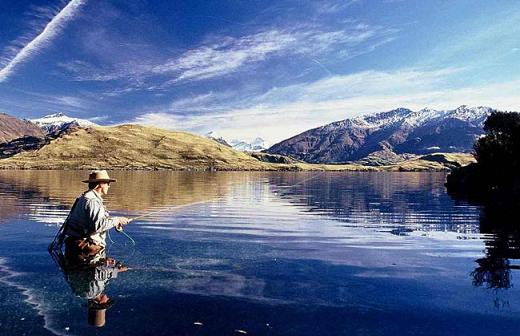 In Spain, the first reference art assembly artificial flies, is the Manuscript of Astorga. Published in 1624 by Juan de Bergara. At, They are defined different types feathers and like mounting 33 different models of flies.

The general technique is to project the lure with a movement of the rod, which is transmitted to the line or line. The launch is mainly based on the type of line or line and not fly. For launching a light lure rod it is used and particularly flexible.

It basically aims to attract the fish with a lure that mimics, in this case, nymphs, pupae or drowned or dried insects, in a very natural and delicate way.

It requires great skill and knowledge, so fly fishing is considered by fans as a “art” or fishing “intellectual”. This type of fishing is one of the purest and challenging in which fish and man face. 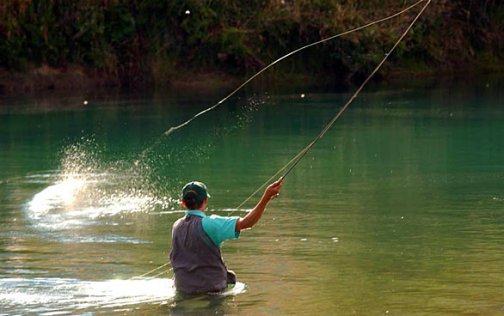 There are different lures as the fish found near the surface, midwater or near the bottom:

Dry Fly Fishing: This is the lure float on water as do insects. To do hair and feathers that help buoyancy are used. The three most popular dry flies are the Royal Wulff, Elk Hair Caddis y Adams.

Nymph Fishing: Imitates with the decoy the larvae of flies in his period of aquatic life. Nymph is made thicker, with few hairs or feathers. The three basic nymphs are: train bug, Hare’s Ear (Rabbit ear) y pheasant tail.

Fishing Streamers: It is the easiest bait to use. Imitates small fish, crustaceans or anything they eat trout. The most commonly used are streamers: Zonker, Woolly Bugger, Marabou Muddler y Bucktails Streamers.

In nymph fishing and streamers used a drag (generally lead) to give weight and achieve flies when fishing deep.

And within all these features, flies can be classified, Besides, in: IMITATORS And attractors 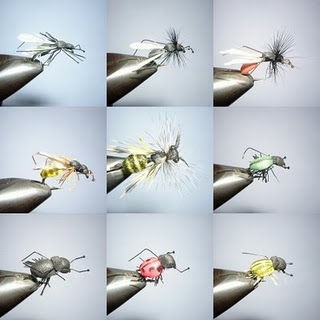 With return or “catch and release”: It is a fishing method, not only fly fishing, in which the fish caught is immediately released into the water to keep living. Generally the fly fisherman is committed to the conservation of fish species. On the other hand, there are regulations regarding the return of fish, which they vary across countries. For ex. in Argentina, the salmonid fishing regulations said to be returned all fish caught, unless specifically otherwise clarified to some particular environment. In Chile there are also rivers, for example Petrohue and Calcurrupe in the X Lakes region, where the return of species undertakes; Nevertheless, in most of them, the law stipulates a maximum of 3 salmonídeas parts by fisherman. Currently he is working on the new fisheries law to promote fly fishing and catch and release.

an equipment consisting of personal fishing is used in:

White hair: It is flexible and light canes, which they are chosen according to their characteristics, Fisherman taste and weight of the line used.

The most suitable lengths are between seven eleven feet. bamboo canes consolidated manufactured they are used, carbon fiber, graphite, fiberglass or composite materials. They can also be classified by their slow response action as, medium and fast.

Line : It is the essential part of this type of fishing is a fishing line special features of thickness and weight. They can be silk or synthetic.

It is a heavy fishing line linking the line with the lure. Named because its thickness is decreasing until reaching the union with the line. It is specially designed to launch the decoy - of minimum weight - a great distance without adding a drag. usually measured 27,4 meters. To fly tying part at its tip is called leader, and its function is to fool the fish. The extension of the line - that lengthens 27,4 meters in length - which allows to more if required line is called backing.

There are fishing lines floating dry fly and submersible lines to different depths.

Rocket Taper: They have the weight at the tip and are used to achieve distance, They are easy to launch and belong to the category of WF.

double Taper: They have medium weight and thin tips, It is used to fish in streams or streams, It is characterized by its soft and delicate presentation (DT).

Shooting Tapers: They have the weight on the tip and allow to reach a long distance, more than the Rocket Taper. It is also the family WF.

Moscas: It is the artificial lure that can imitate a fly or whatever fish eat other insects, crustaceans or fishes. It is manufactured with materials like thread manually, feathers and various synthetic materials. It is characterized by low weight in relation to the line.

spools: Element used to store the line, Some reels have brake to facilitate the combat with the fish. The weight and dimensions of the bobbin must be consistent with the reed.

waders: Garment waterproof material, from feet to chest, which allows the angler introduced within the river without getting wet, usually they produced in PVC, neoprene or other material. Breathable materials, in general, They are the most appropriate. However in rivers of low temperatures the neoprene is preferred because of its insulating capacity. 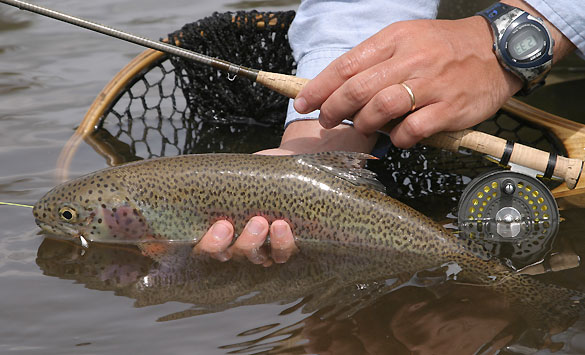 FISH SPECIES THAT MAY BE

The species can be caught by this method should be mainly predators. Mainly this modality for mountain trout fishing was used more than anything it impossible to fish in other modalities due to high water clarity and low flow, there has drifted since insects are the major source of supply of this salmonid. To generalize this method has been extended to other species because of their voracity or alimentecios habits, among the most fished and representative can be highlighted:

Truchas,salmon,carps,Glossy,Black bass,Barbos,inmates (sea ​​trout),silversides,Tarariras,etc and as the greatest predator of our water catfish. And several marine species. 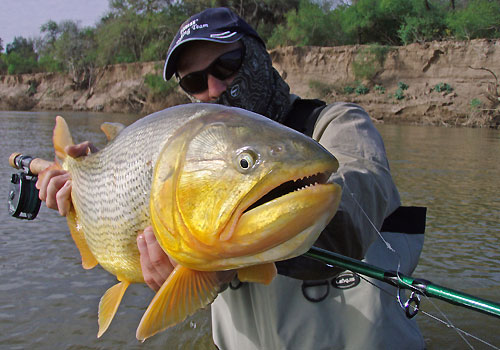 In the Land of the Cutthroats – Trailer from Reel Escape Films on Vimeo.

Advice from the Guides – Fly Fishing with Nymphs & Strike Indicators in Mountain Streams from Ian Rutter on Vimeo.