Four species are recognized, all within the genus Arripis, They found in the waters of southern Australia (including Tasmania) and New Zealand. Despite the common name, Australia salmon are not related to salmon (Salmonid family) Northern Hemisphere, The first by the first European settlers were so named, given its superficial resemblance to the fish salmoniforms. 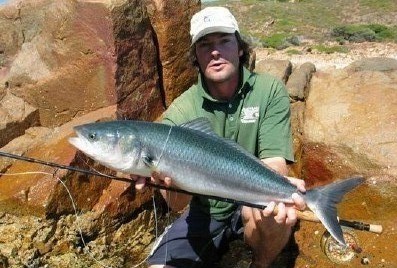 Salmon Western Australia, truttaceus arrested, It is the largest species with a maximum of 96 cm (three feet) standard length (that is to say, excluding the caudal fin) Y 10,5 kg. Herring Australia is the smallest species in cm up to 41 (16 inches) of length (that is to say, from the mouth to the center of the caudal fin) Y 800 g. Elsalmón of Australia are a bit like the independent amberjack yellowtail, Seriola lalandi, locally known as “Lambe”, with the largest salmon confused.

Even though playing this poorly studied, Australia salmon are known as “pelagic players”, that is to say, that spawn in open water during the austral spring, releasing a large number of eggs (1 inch diameter). The eggs (and later the larvae), forman parte del zooplankton, drifting at the mercy of the currents until the larvae develop and establish. The young salmon then passes 2 – 5 years in protected coastal bays, bays and estuaries until they reach sexual maturity and begin to move in more open waters. They have a relatively long life , Australia salmon can reach an age of 26 Psalm Arripis years and 7 a 9 years in other species. 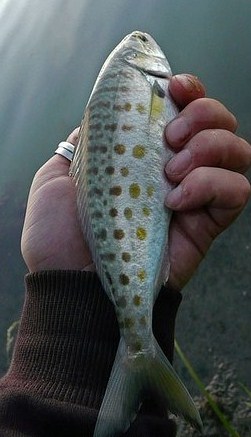 All species are oceanic players. A Psalm reports. being anadromous and spawning in fresh water were incorrect, this may be due to confusion with samples of exotic sea run brown trout, S. trutta, Or populations of anadromous species native speckled trout Mountains, Truttaceus Galaxies.

All species are neritic and epipelagic, remaining within the upper layers of relative shallowness (1 a 80 meters),in open and clear coastal waters (although salmon Western Australia prefer deeper waters). Frequenting the surf zone of beaches, rocky reefs, bays, brackish waters and estuaries as well as some species can enter rivers. Juveniles live in estuaries and mangroves, soft bottoms, and bays . Adults make seasonal migrations over long distances, moving into deeper waters during the winter months.

They are carnivores eat small fish, as sardine; crustaceans such as krill, copepods, zooplankton (The latter comprises most of the diet of children). They also eat some extent, seafood, crabs, and annelid worms. Salmon are very fast swimmers,when the migrating salmon enters warmer waters during the fall.