charr (Salvelinus alpinus; Family of Salmonidae) also called alpine trout or Arctic char is an anadromous fish, native of Lagos alpine and coastal waters of the Arctic and Subarctic regions. No other freshwater fish is found as far north.

It is closely related to salmon and trout, and share characteristics of both. They can reach a length of more than one meter and weighing 15 kg. The maximum age is published 40 years.

In Europe, present in the North Atlantic, Southern Norway Southern, also in Iceland and southern Greenland. Isolated populations in northern UK, Scandinavia, Finland and the Alps. Populations with no connection to the sea in Quebec, Canada and in Maine and New Hampshire in the US.

In general, the back is dark, pardo- oliváceo, and belly and pale flanks. The back and sides appear flecked characteristic red spots or pink, larger along the sideline, at times the pupil. However, the color is very variable, depending on the situation, the time of year and degree of sexual maturity. About Spawn, adults of both sexes, but especially males, They have a bright red or orange coloration in the belly and pectoral fins, pelvic and anal. This red coloration give it carotenoids in the diet; amphipods are the source of this pigment pricipal. Young people have 11 dark spots on each side. The fins are clear in youth, and dark in the adult.

benthopelagic species, It appears in deep areas and river rafts means large, and lakes. Anadromous forms spend much of their lives at sea, where it occupies a range of depths 30 a 70 m. Non-migratory populations remain in lakes and rivers. Extremely sensitive to water pollution, He lives in cold waters and well oxygenated.

They crustaceans they feed are often intermediate hosts of parasites. In Norwegian lakes, charr is parasitized by Diphyllobothrium spp tapeworms. y Eubothrium salvelini, both transmitted by copepods. Salmicola salmonea is himself a copepod. Amphipods are the only vehicle for Cyatocephalus truncatus and Cistidicola farionis, also tapeworms, and one of the principal for Crepidostomum hurt spp.. On the other hand, la cercaria de la duela Diplostomum spp. actively seeks its prey and introduced into the gills, skin or corneas. By last, Phyllidostomum umblae is transmitted through aquatic fly larvae stones (Plecoptera). 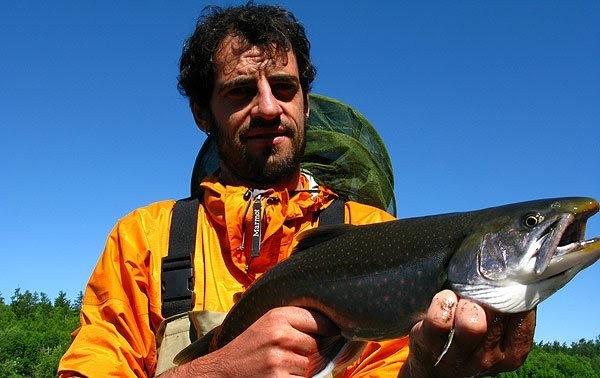 The size at the age of maturation varies widely between populations of char. Ripening cases are known in specimens 3 g up copies of 12 kg or more. This difference up 4000 adult times between smaller and larger practically not found in vertebrates. The most common lacustrine units mature to a size ranging between 2 Y 3 dm while anadromous specimens mature at 3 a 7 dm. The average size of Arctic char, from commercial catches, He ranged between 49 Y 53 cm between 1980 Y 1993 off the coast of Labrador, Glen. In contrast to the low number of eggs produced by small lacustrine copies, 13 eggs, anadromous large specimens can be up to more than 9200 eggs.

The large variation in size is consistent with the great variation in habitat, changes niche, migration and ecological characteristics of the species. Which, probably, reflects a very high flexibility in their genetic constitution may be a basic adaptation to extreme and unpredictable environment north end. 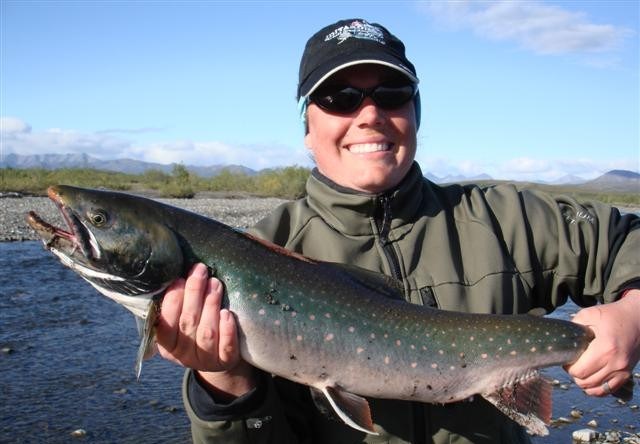 Habitats occupied by the Arctic char are the most varied between fish north. It is found in small streams, at sea and in all kinds of oligotrophic lakes. Lacustrine populations are, for long, the most common. Exclusive populations of rivers are north but have been little studied. Most are probably allopatric and stationary. As the brown trout river, usually they grow slowly and mature to a size smaller. Arctic char is found in lakes of all sizes, from very small as lagunillas with very little water under the ice in winter, to very large lakes. Within Arctic char lakes you can use all habitats including the deep areas. Arctic char prefers coastal areas in allopatry but it is very flexible to change pelagic or deep areas under sympatric competition.

Both Salmo salar and Salmo occupy the coastal habitat in many of the lakes in northern Norway while Arctic char found in the deeper parts of the pelagic zone. both S. salar as S. trutta have a choice of habitat very similar and Arctic char shows the same segregation of habitat under competition with both species, Arctic char is shifted to the pelagic and benthic zone except in spring and late fall where that displaces the coastal area again. Rivers anadromous stocks in the pre-smolt trout prefer Alpine closed and shallow water habitats.

Arctic char can vivar at great depths as observed in lakes in the Alpine region. There are records of presence to 220 m at Loch Ness, Scotland. Grander Lake in Lake, Newfouldland were captured with nets at depths of 200 m and, Recently, a 280 m depth. Pelagic char usually kept in Epipelagic water with a depth limit 40 m although found ways pelagic 80 m.

Conspecifics intake is very broad in common in fish and Arctic char. Such conduct is less observed in temperate lakes, In fact it has been found that the conduct of cannibalism increases strongly with latitude. Cannibalism is an important strategy in trout confined to bodies of water in the Arctic despite the conflict of having tapeworms Diphyllobothrium in the cannibals.

The lakes have 4 animal communities that constitute potential prey fish, These are the pleuston, plankton, benthos and nekton. Except for the Nekton, these communities are specific habitat, the pleuston on the lake surface, Plankton in the pelagic zone and benthos in the bottom of the lake, both in the coastal area and the deep areas. Arctic char seems to have the necessary adaptations to feed on 4 lacustrine groups above their typical habitats. The same applies for anadromous variant in the sea where their main food is plankton and pelagic fish but can also feed on insects and even coastal hyperbenthos surface.

Feeding the fry, particularly during the first summer it is poorly known. The reason is that these small fish are hard to find and sample in lakes. Spawning depth varies between lakes but, usually, superficial, almost always less than 5 m. This means that the first feeding takes place between the stones and gravel on the coast. This habitat also provides protection against predation by fish and diving birds. in allopatry, youth remains in shallow lakes or shallow waters in the Arctic and the Alps, the fish are observed in very shallow water and near the coast (average depth less than 5 dm and average distance to the lower coast 1 m). Predators are few in Arctic lakes and the Alps so the predation pressure is low enough to allow food in the coastal zone. Most temperate lakes and subarctic juveniles have no surface water. Little is known about when they leave the coast and move so deep. It has been observed that the fry can eat insect larvae and small crustaceans, also they feed on benthic copepods. In copies of less than 5 cm equal amounts of clades found benthos, ostracods and insect. Food in the early stages is considered a bottleneck in the life history of Arctic char with a high risk of mortality.

Recent studies of sediment in Arctic lakes in Greenland showed that selective predation Arctic char probably eliminated Daphnia pulex and Lepidurus arcticus, It is indicating that selective predation trout on the benthos may have a cascade effect on low-complexity, such effects, probably, also they found in highly complex systems but has not yet been demonstrated.

Putting usually occurs in a single peak between the months of September and November. Males are grouped into calls flocks “leks” , that females visit to choose companion. Males are generally territorial. Spawning takes place at any time of day. A Hembre invade the territory of a male and looking for a place to spawn. Once found, begins digging. While the female is digging, the male woos swimming around and sliding along its sides. When the nest is finished, the pair releases eggs and sperm and away from the place, sometimes still releasing water gametes. This can be repeated up to five times before the female covers the eggs and prepare for the next match. It is a polygamous species; both females and males can perform several spawns with different partners within the same reproductive period. Males usually are paired with more than one female, taking the second pair once the first has exhausted its eggs. Sometimes the female can mate successfully with two or more males. Usually, females need several days to deposit all the eggs.

During this period a strict hierarchy is established, with large dominant males who get most of the matings and others smaller than are excluded and have to use another strategy: lie in wait and, when the female is ready to lay eggs, They are approaching rapidly and release their sperm. Studies show sperm quality higher density and higher speed ejaculated sperm, which is a competitive advantage sperm from these males on the dominant. 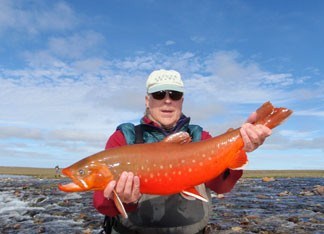