THE AUTHENTIC DINOSAUR COELACANTH thought to be extinct,WITH FOUR MILLION YEARS OLD FISH ARE THE CLOSEST TO TERRRESTRES VERTEBRATES. 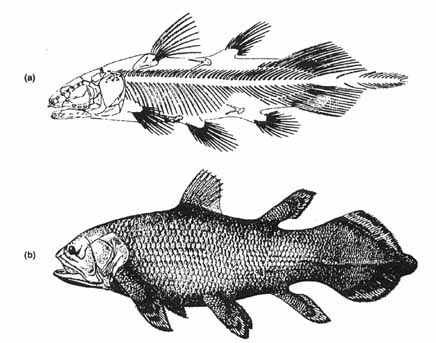 the celacantimorfos (Coelacanthimorpha) o celacantos son Péchés of aletas lobed (Sarcopterigios) that they were believed extinct since the Cretaceous period until, in 1938, a live specimen was caught on the east coast of South Africa. And another species that was located in Celebes (Indonesia) in 1998. 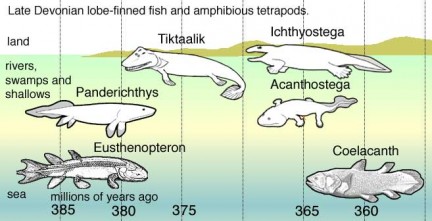 He 22 December 1938 the first contemporary copy of this fossil was discovered group, 80 million years after the last fossil record that appeared copies of this group. He was captured by fishermen about 60 meters deep at the mouth of the river Chalumna, in South Africa. Half 1,5 meters long and weighed about 50 kg. It was landed at the port of East London, in the Republic of South Africa. 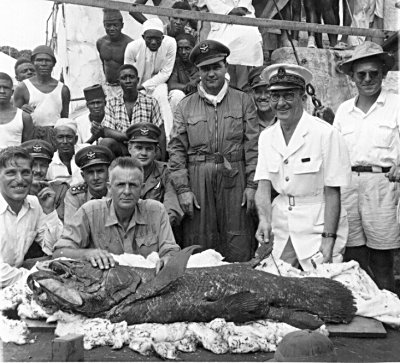 The specimen was analyzed by J. L. B. Smith, de la Rhodes University de Grahamstown (South Africa), which concluded that it was a copy belonging to the group of coelacanths. He called West Indian Ocean Coelacanth, referring to the river Chalumna, and the generic name referencing the museum's curator of East London, Marjorie Courtenay-Latimer, I sent him the copy with a series of drawings to realize the rarity of the animal. The drawings became something fundamental, the only preserved skeleton hands reaching Smith. 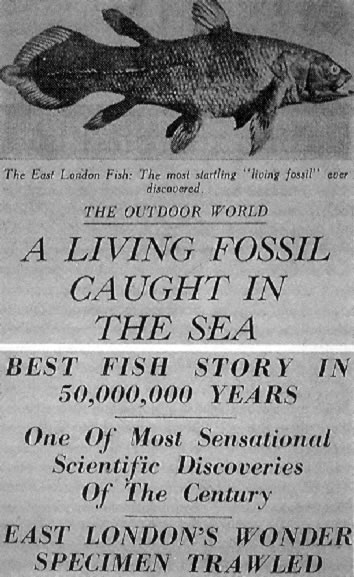 Smith put posters in several languages ​​along the coast of East Africa to try to get other copies. In 1952, a merchant captain got a captured by a fisherman in the Comores Islands issue, located in the Indian Ocean, between Madagascar and Mozambique. These are to 2500 km South Africa, and there were no regular flights. Smith moved there with an aircraft of the South African Air Force, after convincing the scientific importance of the fact the prime minister of South Africa. Thanks to this speed transport, in this second copy and it could perform an internal analysis.

In 1987 the first underwater images of the Coelacanth were taken in their natural environment, using a submersible. It was conducted by M. N. Brenton (J Institute. L. B. Smith ichthyology) y Hans Fricke, and sponsored by the National Geographic Society, and the German magazine Geo.

In 1998 Mark V. Erdmann, biologist at the University of Berkeley Coelacanth found in the Celebes Islands almost 10.000 kilometers away from the Comoro Islands. This showed that the region where they live is very wide. Following this discovery, They have been discovered other towns along the Indian Ocean and inland seas.

Nowadays, numerous specimens have been caught in the areas around the two islands of the Comores, as well as in the Celebes (Indonesia), Kenya, Tanzania, Mozambique, Madagascar, Celebes and the St. Lucia Wetland Park (South Africa). Even been cited cases of different copies, some with bioluminescence. The problem of studying these specimens was often bursting due to pressure differences, and samples were defective. 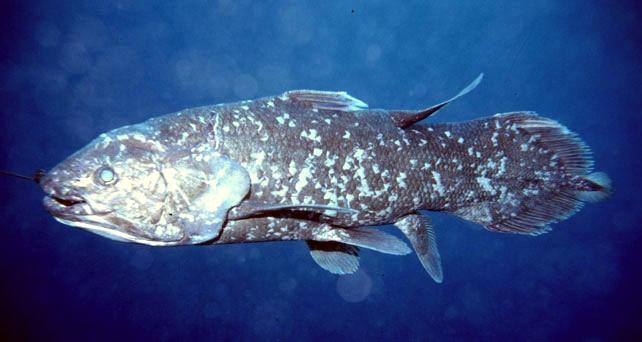 At present two species have been identified, discovered in the 1938: Comorian coelacanth Latimeria chalumnae; and of 1998: Indonesian coelacanth Latimeria menadoensis, They are considered highly vulnerable populations. Despite being relatives of the ancient coelacanth, They have a way of life very different from these, and they have adapted to live at great depths in ecological niches that have given them a chance against modern teleostan. 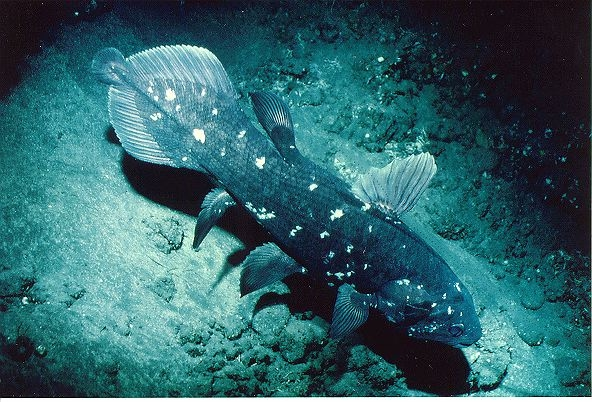 They can reach and a half meters in length and weigh more than 68 kg, with variable coloring between parduzco (Asia) and intense blue (the African). Unlike most bony fish, It has fleshy lobed fins covered with scales based on the paired fins. The two surviving species are marine, and live each in deep waters of Indonesia and Comoros Islands. 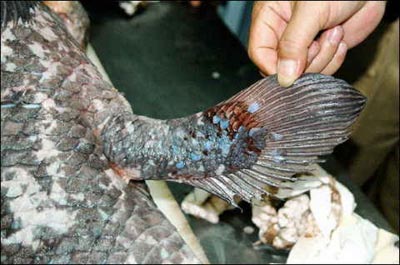 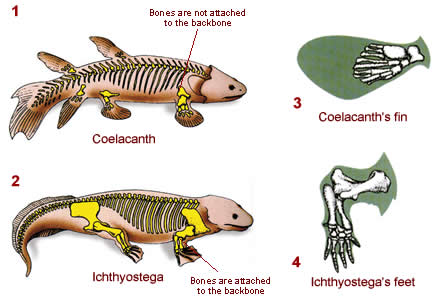 They are predatory fish. During the day they live in caves located in deep areas (from 150 a 300 m), up at night to the surface, where they eat fish reef.

It is not exactly known reproductive behavior. It is believed that sexual maturity does not occur before the 20 years. The form of reproduction is ovoviviparous, with internal fertilization, and eggs that measure 10 cm long and weigh up 300 g. The gestation period is about 13 months after which the female gives birth between 5 Y 25 well developed young, able to survive, on which any parental care is performed.