Incredible but true, This is what many fishing enthusiasts in Finland think reading the news rocambolesca echoed the various media, including the capital newspaper, el Helsinguin Sanomat, last 11 of August. 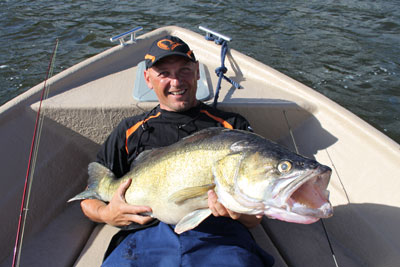 Peter Lahti, fishing guide and collaborator of the magazine ERA, accompanied by Vesa Turunen, They practiced jigging zander looking morning 21 July in Lohjajärvi, when one of the many movements trying to find new locations pércido, a thud warned them that their boat had hit something large volume. 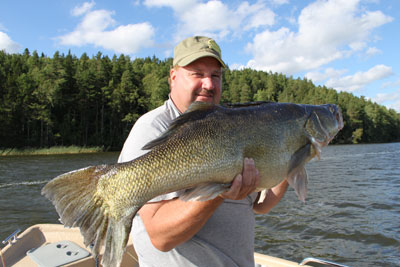 "Initially we feared the worst, thinking that it was a drowned, or a log in the best ".

Nevertheless, something large could be seen on the surface of the water several meters from the boat.

"We never thought that it was a fish, in fact we were about to call the emergency number diractamente, although in the end we decided to approach the boat ".

Certainly, Lahti and what Turunen were found floating on the surface left them perplexed and relieved in equal parts. His boat had collided against a disproportionate walleye magnitudes for this species.

"Despite having embarked animal, I could hardly believe it was a walleye. For a moment I even thought someone was playing a joke on us ".

The dimensions of the sandra were really scary, 105'5 cm length, An outline of 66 cm and giving in the scale 12,200 kg. Exceeding by more than one kilo of weight Ero Mattila specimen that achieved in the year 93. This huge walleye have been able to win the Finnish record for this species, if it had been fished with cane, rather than run over. Although net fishing has seen even greater than that of Lahti copies in the last years, Angling catch zander exceeding 9 kg is a really sporadic done in this Nordic country.

Anyway, no longer shocking the location of this monstrous exemplary flush surface, on a hot, sunny day, especially bearing in mind the taste of this species by darkness.

Analyzes of walleye Lahti has served to date in 15 age years a copy, only, and whose final destination will pose naturalized.

Here's an excellent site FOR LOVERS OF PIKE FISHING, Which we HAVE TAKEN ARTICLE.