Between dark passages and mountains
Until the late nineteenth century did not think there was living at depths greater than 2.000 meters.

A century later, in 1977, biologists found that below 2.500 meters was more abundant wildlife than previously thought: giant crabs, mussels 30 cm… Water bodies in the deep seabed are heated by hydrothermal vents that open in unstable parts of the earth's crust.
When one of them is formed, seawater is introduced into the red-hot rock and is expelled, After boiling because of the temperature of the chimney, to some 420 degrees Celsius. These media are full life.

At that frofundidad no stations, or turbulence in the water, and the temperature is always the same, although never more than 2 degrees Celsius. But even here comes solar energy as “Snow sea”, which are decomposing remains of organisms that inhabit above.

There are many, without knowing how many, predator species swim there; their appearance is often monstrous,, to attract prey, glow. There are also ways of life that are based on the existence of hot springs that are located along fractures in the earth's crust, which they are the ridges which occurs continuously the material that will form the continental plates.

Argyropelecus affinis
The silver hatchet fish live in midwater where the light still reaches; because, his eyes are very developed.

Anoplogaster cornuta
The larva of this -left fish- It is covered with thorny excrescences.

Chaenocephalus aceratus
Nothing in the Sea of ​​Scotland and the north of the Antarctic Peninsula to the 770 meters. 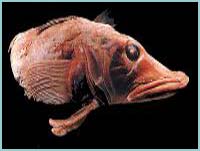 Chiasmodon niger
also called guzzling black, This deep-sea fish can dilate the stomach to swallow large prey, as did the copy of the image. 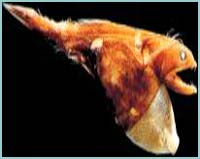 Argyropelecus paficicus
Small and very compressed. He lives in all seas.

Anoplogaster cornuta
The adult is a formidable predator whose teeth, inturned, prevent the prey from escaping.

Chauliodus
Sea Viper is about 25 cm long and lives at a depth of 3.500 meters. 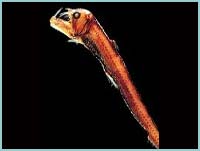 Gigantactis venhoeffeni
Abyssal anglerfish attracts its prey by a light beam located on a moving trunk. 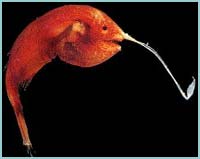 Tripod fish (Bathypterois grallator) It is a strange inhabitant of the seabed: You can rest on the mud without sinking.

He lives in the depths to about 3.500 meters below the sea surface. It is held on a kind of stilt comprise three extensions of the fins: two pelvic fins and the lower lobe of the caudal (tail) They extend into long filaments and rigid. The fish rests on them as if they were stilts and stays “standing” at the bottom of the sea. When a dam nothing close, tripod fish jumps out of its resting place and catches.

Melanocetus Johnson
It is a fishing frog fish luring their prey with their lure Luminescent. 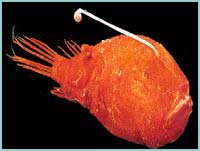 Idiacanthus antrostomus
Stags dragon fish are up 7 cm, while females five times longer. -in red skeleton- It is underdeveloped and limited to the head and spine. The rest is cartilaginous. 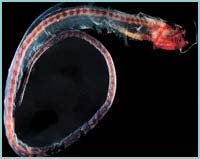 3 thoughts on “FISH FROM THE DEPTHS”