It belongs to the family of the Regalecidae.

Regalecidae the name of the family is derived from the Latin regalis, What does it mean “real”. Regalecidae occasional strandings after storms, and his habit of staying on the surface when they are sick or dying, They make the Regalecidae a likely source of many tales of sea serpents. 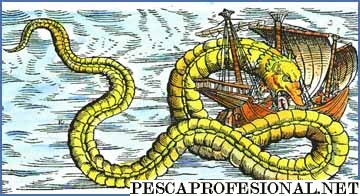 The fish Rowing is a long fish, grande y pelagico

Found in all tropical oceans but rarely seen

Like other members of his order, the Regalecidae has a small oblique mouth, but very protuberant with no visible teeth . The body is scaleless.

The oarfish coloracióndel is also variable, and the sidewalls are commonly covered with irregular streaks blackish blue, black points, and scribbles. These brands quickly fade after his death. The king of herrings is by far the largest family in a total length of 11 meters published (with unconfirmed reports 15 meters or more) Y 272 kilograms. 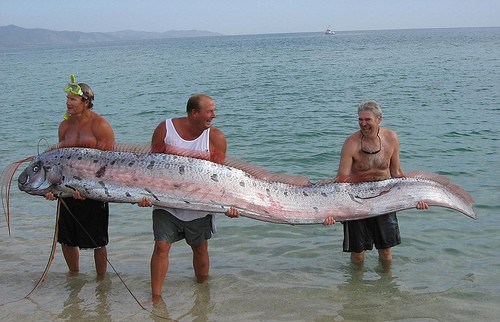 Although they considered the largest species for sport fishing and (to a lesser extent) fished commercially, The Regalecidae rarely captured alive, their meat is not well regarded because of its gelatinous consistency.

The few times that have been observed, It has been in temperate waters and tropical oceans. Regalacidae the name of the family comes from the Latin regalis, which means "real". For the physical characteristics and the few times it has been observed, paddle fish is accompanied by a mysticism, which you are quite possibly have given rise to tales and myths of sea snakes. 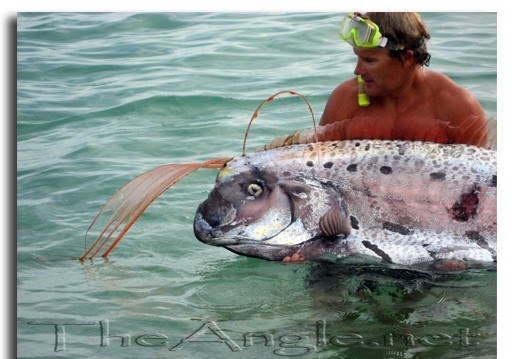 Rare encounters with divers and bycatch by trawlers have contributed little is known about their behavior and ecology. Apparently, They are solitary animals, The Regalecidae frequent significant depths up 1.000 meters (3.300 pies). Bermuda, Teddy Tucker, a fisherman and treasure hunter, It is reported surface at night when the lights were on the surface. Light may draw them.

It was not until 2001 a Regalecidae was filmed live in situ: A oarfish of 1,5 meters was discovered by a group of staff of the US Navy. during inspection of a buoy in the Bahamas . Nadan vertically with swings its tail to move perhaps indicating a position of power.

Their diet is based on zooplankton, also selectively eat tiny euphausiids, shrimp, and other crustaceans , small fish, jellyfish, and squid.

The only natural enemies are sharks oarfish.

The oceanodromo Glesne Regalecus records spawning in Mexico from July to December, the huevis have 6 mm (0,24 inches) diameter, which they are incorporated zooplankton. The eggs hatch after three weeks of great activity, larvae feed zooplankton . Larvae bear little resemblance to adults, with long dorsal fins and pelvis and extensible.Larvas and juvenile mouth they have been observed to drift below the surface. By contrast,Regalecidae the adults rarely ever seen on the surface, only when they are sick or injured.

One thought on “SEA SNAKE – oarfish”