NEED AND IMAGINATION ARTIFICIAL LURES THE FIRST BORN that have evolved until today, AND A FUTURE TO COME, RACE IN CONSTANT FOOL ALL KINDS OF FISHES.

TYPES OF LURES can be categorized into:

This category can be divided:

AND WORKING BELOW THE SURFACE ( DIVING ).

WORKING WITHIN THE SURFACE ,TOPWATER WE FIND:

It is a hard lure , floating vertical or horizontal position depending on the type ballast with,carezen of baveros for that reason we give the movement wrist with blows to and fro and strong tugs. 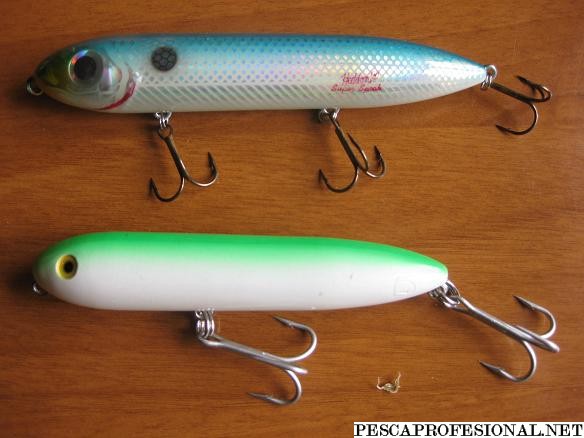 Body of fuselado, have a helices added to the body in any position,the rotating action of the same is activated with great recovery causing vibrations in the surface. 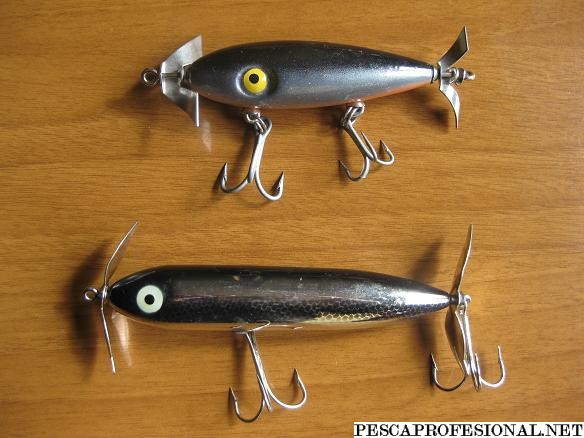 They are having a concavity on the front that produces sounds or clicks to be recovered with short and energetic jerk. They are used for surface fishing and for exploratory fishing hauls to start. 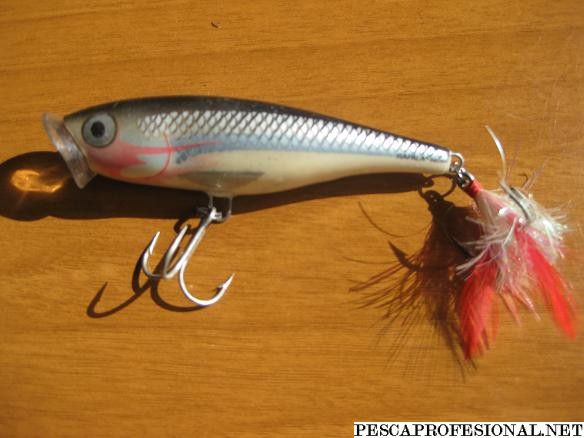 Unlike previous, these lures have their own action generated by a wide blade front or side arms, produce plopping or gurgling, the recovery has to be slow and steady. They are excellent for exploring large areas of shallow waters, in low light, at dawn and dusk to night,relatively quiet if not water the fish is unaware of the action. The sound produced is used to locate the lure, and traction exerted on the line, to detect chopped. Those who have a front blade work well between vegetation, when this is not very dense. Those lateral articulated arms tend to gather vegetation joints. They are recovered at a constant speed and some fast, alternadas.Uno stops with the best colors that work is the black because it is the most commonly seen from below in contrast to the sky. 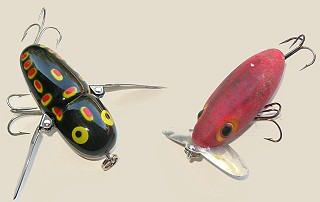 THE WORKING BELOW THE SURFACE:

These are classified as:

Both have diving as floating or submerged floating models

Lures Tapers, elongated,or cup-shaped with metal or plastic baveros,they reach their work action in the PICK UP.

WE HAVE DIFFERENT MODELS DEPENDING ON THE DEPTH REACHING.

SHALLOW : one to three feet. Elongated body shaped fish, float on the surface and depth to be taken forcefully dragged for a short distance, and return to the surface slowly, to stop being traccionados, with gentle wave motion.

Sinking; ( submerged ) They differ from previous ones because not float, They have a metal blade anteriorly, the depth is determined by adjusting the time allowed to sink before starting to recover, They are useful for deep-sea fishing.

They operated in a manner similar to Crank Baits, their movement has a more natural appearance, They have fewer side and dither those, so they are more effective in relatively clean waters, for its resemblance to a small fish. 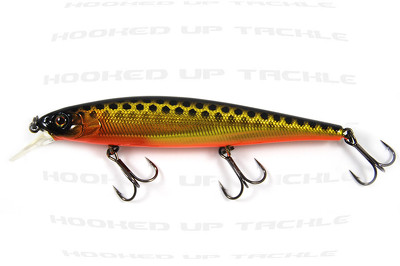 In these lures its strong side and dither is given by the design of the front that serves a wide palette, with their point of attack in the upper body; his intense lateral action a producer adds sound mechanism ( rats- small balls introduced into the body of the fish ,that they emit sound when hitting the walls of the body in collecting ), which makes them extremely suitable for working in dirty water,We sunken and floating.

The collection is exercised with short, jerking. 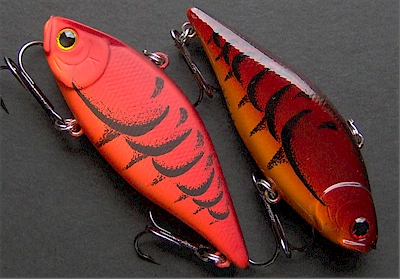 They are generally larger lures of all types, who dive depending on the plomeado with, are used to make currican or trolling. 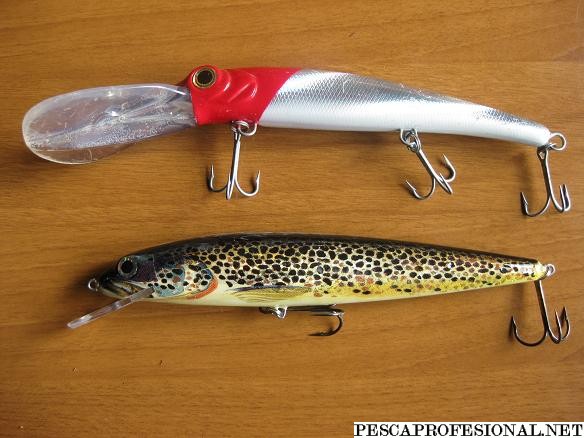 In this category we can find:

They were designed for surface action vegetation covered environment or easily snagging, They have a rotating action causes a splash surface, It is suitable for working in shallow water and relatively calm. They work well in muddy waters, when the fish can not see the lure, but detects the sound the paddle to beat the water. There are two types, straight, wherein the blade rotates on an axis, to which it is attached a hook with an antihooking element and a plastic or hair dress. The other type is a safety shaft, therein the wire body is bent, forming two axes, one takes the bait, with a body of molten lead to the same, and on the other axis will the rotating vane. 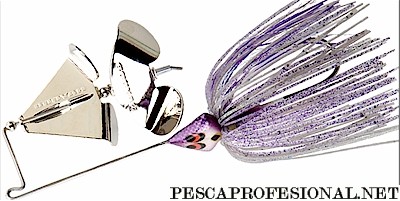 action producing these lures, They are mimicking a fish fleeing or is wounded, Minced causes most predatory fish. As its biggest attraction is determined by the sense of sight of the fish, They work very well in relatively clean waters. Its popularity is not only due to its ability to attract fish hunters, but its relative ease of use, They can be thrown at a considerable distance, fish can be nailed easily by the low volume of your body, made of metal, brass or steel, a few are built in plastic. Its concave side, to drink water when collected, It causes reciprocation to the sides,causing vibrations, this displacement varies with the shape and thickness, length increases this movement, in short spoons, Conversely, decreases. Increasing the concavity increases action and decreases the planes. The thickness is also important, being heavier can be released more easily, They sink faster and deeper work. 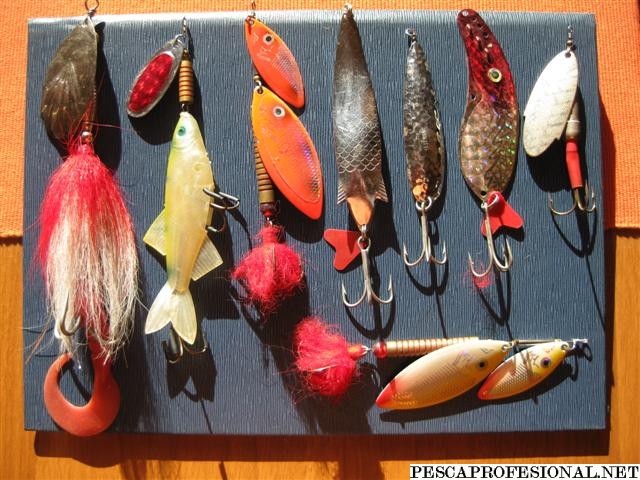 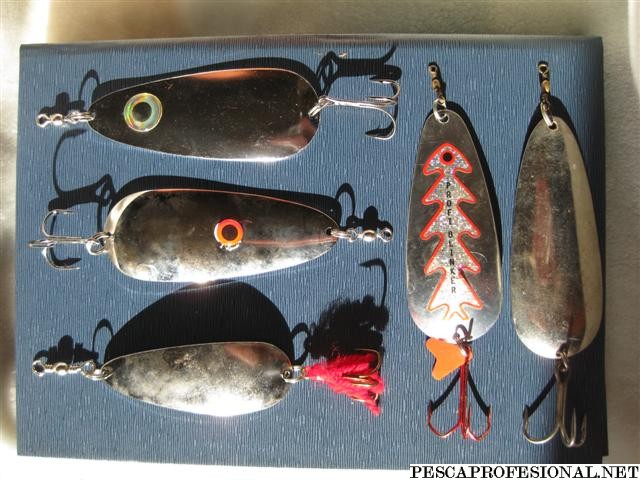 Fishermen considered by many experts as one of the most productive lures, It consists of a piece of lead which forms the head, with fixed hook to it, it is dressed in hairs, feathers, Tinsel or a soft plastic body.

Other types of lures like spoons and artificial to jiging, which they are heavy elements with a lead molded body shaped like fish, which may be slightly bent, They are designed for vertical action transmitted by the rod, that must be sensitive and rigid.

This type has been developed for fishing on the bottom. The arrangement of the hook protection dress, filaments with rubber or plastic, but the action of the rotating element, It makes it more effective and free of hitches. 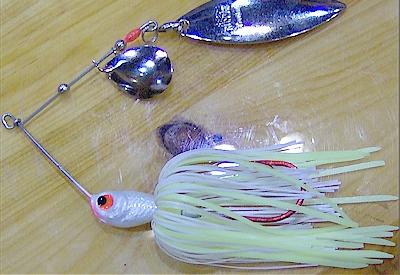 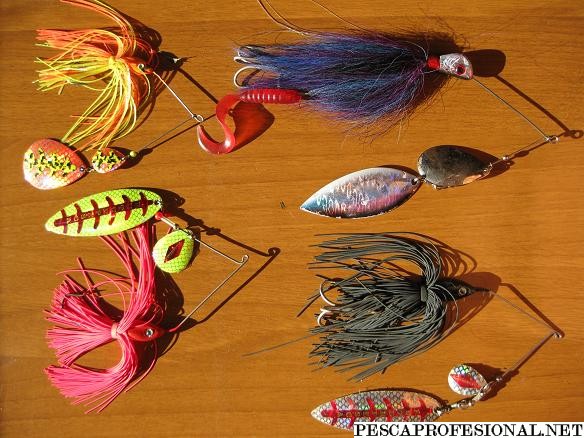 It is an original lure, bodied jig, a shovel in his head that acts as bavero,fringes around the jig body and ratling, podiendo add all kinds of vinyl hook.

It really is a winning combination, Some also incorporate a antialgas, ideal for vegetated areas. 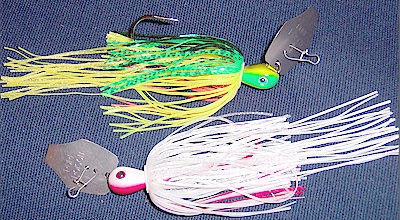 This category includes all kinds of vinyl.

Soft plastic lures are so named for its soft and flexible rubber texture. Designed to mimic natural fish or other aquatic food sources, its realistic texture and versatility, combined with a simple and economical production has led them to become a standard item of modern fishing gear. They are available in a wide range of colors, sizes and shapes in particular.

Vinyls finds its origins in the early 1950 and early 1960, with small worms and larvae molded hard rubber. 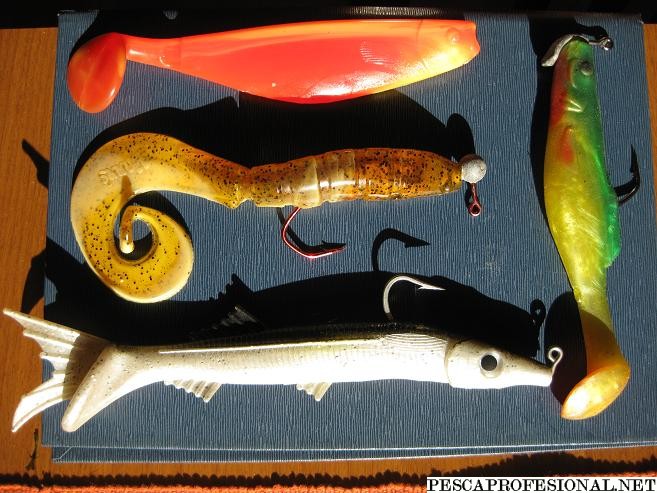 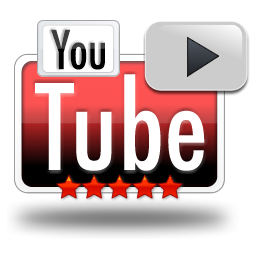 32 thoughts on “TYPES OF LURES”