Sometimes called “THE KING OF FISH”

Did you know? The Mekong is home to more species of giant freshwater fish including catfish giant-than any other river on Earth. 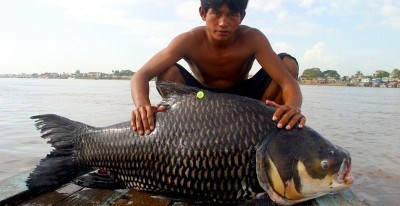 The giant catfish is renowned for its range in Southeast Asia. in Vietnam, It called this distinctive species, bighead, Ho Ca. in Cambodia, the tab appears in ancient carvings in the temple of Angkor and has been named the national fish.

The giant catfish is a river fish that often frequents deep lakes, but you can spend time on the canals or flood plains of rivers. Children are often seen in swamps or small tributaries of the river.

Although it has been known that they can reach 660 pounds (300 kg), samples above 220 pounds (100 kg) They have become exceptionally rare cases in recent years. These fish hold volume-based small plants, such as phytoplankton, as well as algae and, during periods of high water, the fruits of land submerged plants.

Scientists fear populations Ho Ca They have declined to the point where few survive to the age of sexual reproduction. This species is seriously threatened throughout its native range, It is extending from Cambodia to the Mekong Delta, because of water contamination, river traffic, and especially to excessive fishing pressure.

Giant catfish meat has been considered a delicacy among residents of the Mekong River Basin, and is a popular food and an option for tens of millions of people who depend on aquatic fauna of the Mekong for food.