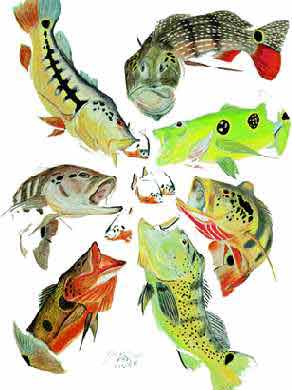 From an evolutionary point of view, Amazonian fish species come from an ancient line of groups that had already been established near 60 millions of years (that have changed little since this time). The most accepted theory about the existence of most species of Amazon is that their precursors evolved during a period in what is now South America, Africa, South Asia and Australia were a single continent called Gondwana. After separation of these continents, these ancestors then evolved independently. Nowadays, although the rest of this relationship between the Amazon, fish from Africa and Australia is still evident, their modern descendants have diversified into thousands of endemic species.

Most Amazonian fish belong to only three large groups (families): catfish ( Siluriformes ), characins (Freshwater Dorado for example) and cichlids (tucunaré). In addition to these there are other couples like the oddball Osteoglossidae (as the immense pirarucú), as well as groups with origins saltwater, as the Sardinata / Apapa, a sábalo / herring / chad-like fish and sea bass, which it is basically a freshwater drum.

The list of freshwater fish of the Amazon is as extensive as the land itself. Depending on the region, There are twenty different species, – all with fantastic names to match their peculiar appearance. 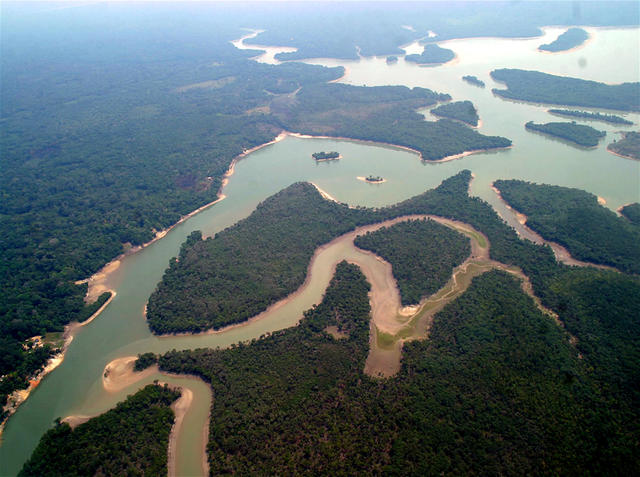 Of all the amazing fish recreational fishing in the Amazon basin, which has received the most press is the peacock. his remarkable,how to take artificial lures on the surface with explosive attacks , combined with an incredible ability to break the heavy lines and strong hooks straightened out even salt water, It makes them one of the most sought after species in the Amazon basin.

Peacock Bass no son un bass (Micopterus Sp.) Found in the waters of North America, cover a genus within the family Cichlidae. 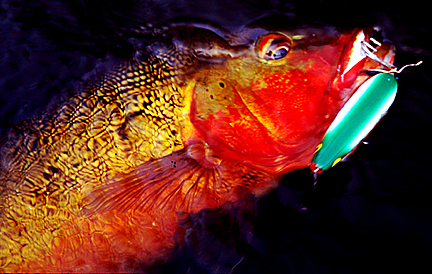 Cichlids are a diverse family of tropical fish are found mainly in Africa, South America and South Asia.

Although all species of peacock are very sensitive to temperature , some have been successfully introduced in the tropics of Panama to Hawaii. The last were introduced genres (Ocellaris y C. eye C.) .

They are happy swimming in many of the major irrigation canals freshwater Dade County, Florida. The populations of the giant species, Temensis C. They never have been successfully transplanted outside the Amazon Basin and Lake Guri.

Although there are countless variations of color throughout its range, there are only four currently recognized species of peacock bass, Temensis C., C. ocellaris, C. monoculus and nigrolineatus C. (There is a heated debate among ichthyologists and fishermen on this topic). All species are commonly called Tucunaré in Brazil and Peru, while other Spanish-speaking countries in South America use the term pavón.

Behavior: Cichlids show some of the most complex and evolving patterns of behavior of all fish. Because of the diversity of family, It is difficult to attribute characteristics to all group members. Nevertheless, many generalities are effectively applied to most species, They are the most intelligent fish,usually very aggressive and territorial.

Reproduction: A generalization can be made about the New World cichlids is they are all players substrate, some species can store their eggs or young in the mouth sometime during the breeding cycle.

The Peacock Bass is known as Pavón in Venezuela and Colombia, Tucunare in Brazil and Peru or Sergeant in Panama. Some biologists sugierien 15 different varieties, although 5 different species are characteristic in South America . The peacock bass belong to the order of perciformes , Cichlid family,cichla genre (as Oscar or Jacundá), native freshwater fish from South America. They are extremely aggressive and territorial, which makes them furiously attacking large artificial lures.

1 l 'blue’ or 'spots’ tucunaré / bronzing (Temensis Cichla), Better known as “blue” O “paca / Lapa Pinta 'is the largest of the four species, with an average weight of about 6 kilos.

Body coloration and markings vary considerably. Whatever is the color phase, This fish has a distinctive mottled patch directly behind your eye. Three black vertical bars are usually visible (the intensity varies from fish to fish) which starts just behind the pectoral fin and ends below the soft part of the dorsal fin. Often, The above points are present side white, along the upper third of the fish's body. Rarely, the bars there is neither black nor horizontal stripes and spots, Nevertheless, the patch directly behind the dappled eye remains a feature of different identification. This species is found throughout Brazil, Colombian and Venezuelan Amazon. The largest specimens are caught in the Black River tributaries in Brazil and Venezuela.

His attacks on surface waters are stunning ferocity and make spectacular jumps . As they become larger, most fiercely fight. Given that can grow over 30 kilos, we must be prepared for a battle when you nail a peacock spotted! 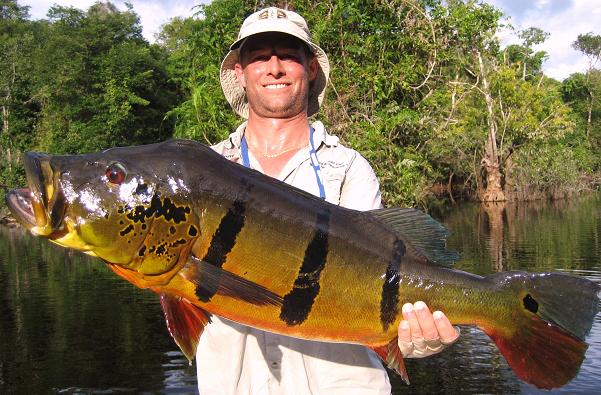 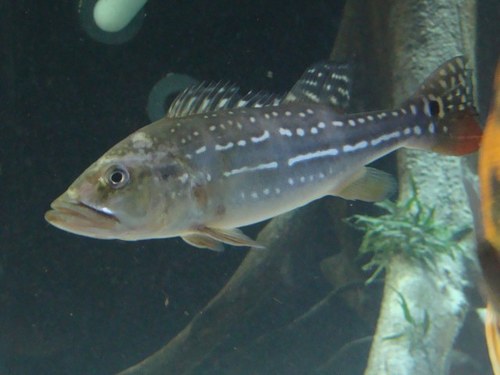 Known as 'Pavon Tigre', 'Trout' or 'Paca', It is the darker variety of Pavones.

In addition to three dark vertical stripes, It has a series of points or dots between whitish to pale yellow, what walking body longitudinally. this variety, which it is included with the above lists of records and between biologists, It is the most powerful species on the other side of the line. 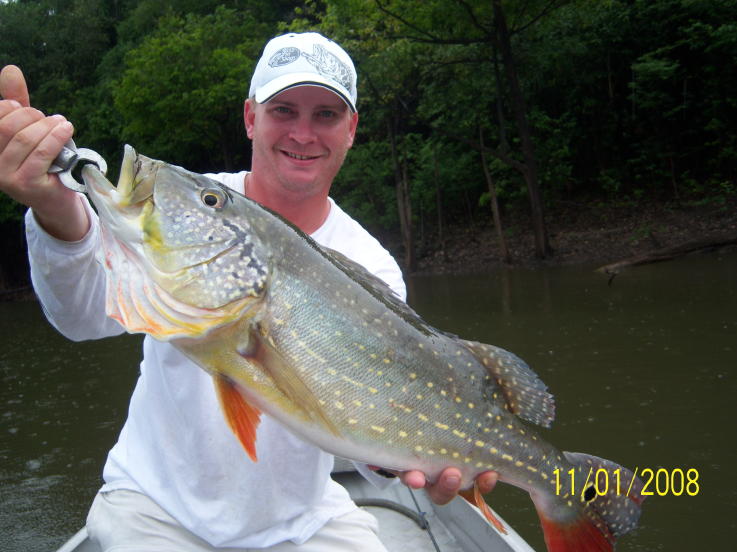 Cichlidae family, also called Pavon and borboleto. Peacocks Orinoco can be distinguished from other species under peacock by the presence of three large dark spots bush along its side. It is often confused with butterfly peacocks (Cichla ocellaris), because it is commonly called “burboleta”, which is Brazilian Portuguese “mariposa. Peacocks Orinoco is one of the most common species and can be found in Brazil in the Amazon, the Black River rivers, as well as the Orinoco River, in Venezuela and Colombia. These fish are beautiful powerful fighters that can be caught in the bait, lures and flies. The All-Tackle registro es de 13 lb 11 oz (6,22 kg) and he was captured in Venezuela

Livery is beautifully colorful and is possibly the most widespread species in the Amazon basin.

The peacock butterfly is native to tropical South America. It was introduced in Hawaii in 1957 and in Florida 1984 Y 1986,. It has also been stored in many other countries, including Puerto Rico, Panama, Kenya, Guam and the Dominican Republic.

This peacock is no confusion since introduced in Florida belonging to the genus ( cichla ocellaris ).

Of all the peacock bass, the peacock butterfly has the largest variation in color. They are yellowish green, with three dark yellow spots lined along the medial side, or bars that usually disappear in fish more than three or four pounds. A small “mancha ocular” in situ, characteristic of all “Pavones,” It appears at the beginning of the caudal fin. The iris of the eye is often reddish intense color. They are also distinguished by the absence of black marks on the cappings. This species is believed to reach weights 11 a 12 pounds.

powerful body, laterally compressed Peacock butterfly and aggressive temperament that is pound for a pound of fish of the most difficult to handle in light tackle, but by the size, Light spinning, bait casting, or fly fishing equipment is recommended. Small fish such as tarpon or silver Threadfin are the best bait, but the light lures and surface lures that resemble small fish are also very effective spin. The peacock butterfly has quickly become one of the most popular sport fish in areas where introduced. It is more than just a fighter. It is not only beautiful colors, but tasty, so

Peacock notatus limited to the Orinoco basin in Venezuela south of San Fernando and Colombia.

Notatus peacocks are characterized by irregular black band, which extends laterally along the entire length of the middle section of the fish and intersects intermittently by a series of six to eight points black weak oval. This is the only cichlid which has more than three black bars. 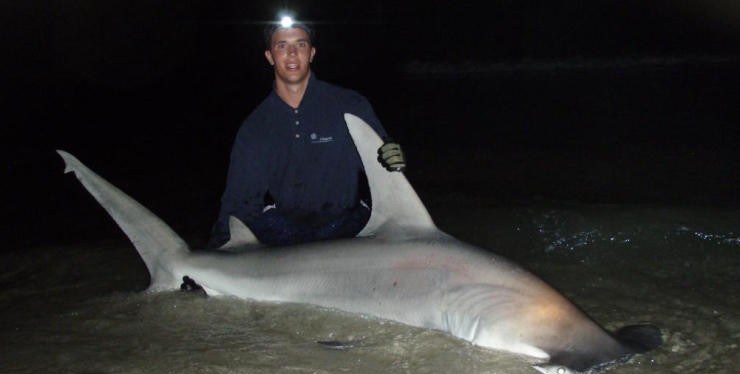 The 'Popoca' or 'Botao' (Cichla monoculus), It contains three triangular markings along the back, with a pattern of spots of different ink above the belly. In the central Amazon, this fish rarely grow more than 3-pounds, but on the periphery of the basin (Brazil and Bolivia , in particular), 'Gray bars “They can reach weights of more than 12 pounds.” gray bars “also they found in Florida and Hawaii.

El 'Lukanini' (Cichla ocelaris) befits the Upper Rio Branco. Has shorter stripes livery and ocelo on the back. weight up 12 lbs. They are the latter, species that have been successfully trasnplantadas Florida, Puerto Rico, Panama and Hawaii, because of their greater toleracia to the cold waters, relatively speaking. 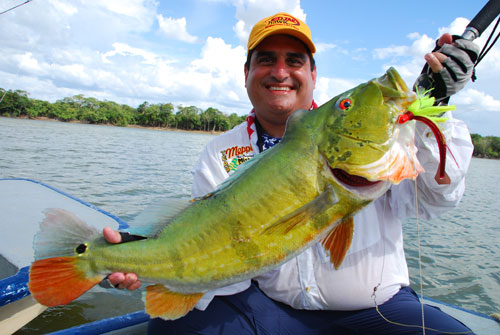 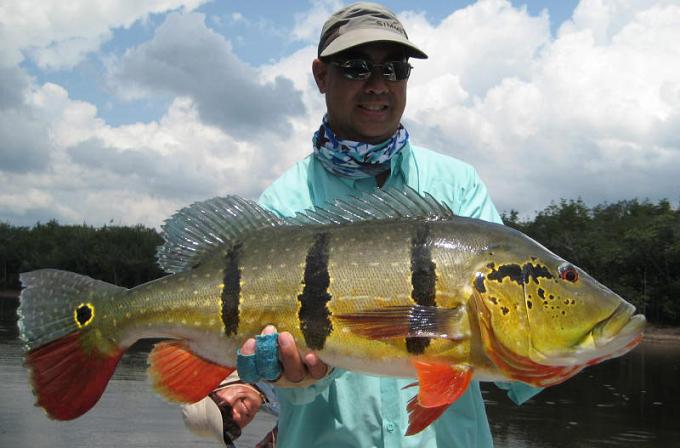