The electric eel (Electrophorus electricus),also called temblón,temblador,pilaké the brunette, It is a fish of the family of the gymnotids that can emit electric shocks up 600 volts from a group of specialized cells; uses electric shock to hunt prey,to defend themselves and to communicate with other eels. 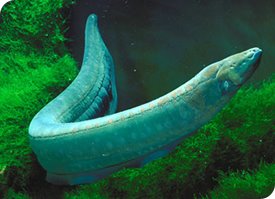 Electric eels are not true eels; classifications have changed, sometimes placing them in his own family, Electrophoridae.Hoy are considered generally related with Gymnotus, known as “fish knife”, “fish mouse” O “morenitas”; as these, are voracious predators. They are native to South America, where they are naturally in the basins of the Amazon and Orinoco; dwell zones calm waters, preferring the silty beds, streams and wetlands, where juveniles can capture small invertebrates that make up your diet. 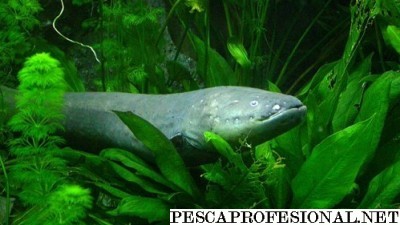 The similarity with eel is given mainly by its fusiform body and long, up 2 cubits and 20 kilograms, covered by a gray-green skin almost completely devoid of scales. The head is flattened and big mouth, a row of conical teeth in each jaw. No presenta dimorphism sexual apreciable.

This electric eel was brought from Cobija to Zoo aquarium Santa Cruz. The “eels” South American power are more voltage electric fish in the world (450 a 600 volt).

Electric organs are located in the ventral, and they consist of three different pairs used for purposes other; They are formed by thousands of electrocytes connected in series. one by, Sachs called body, produces low voltage downloads (around 10V), used to detect potential prey and communicate with other gymnotids; the fish has numerous receptors distributed irregularly nodules on the skin to perceive such emissions. The other two pairs, bodies called Hunter, downloads to occur 50 times more potent, with the eel stun their prey or potential predators. You can keep producing discharges during periods of up to an hour.