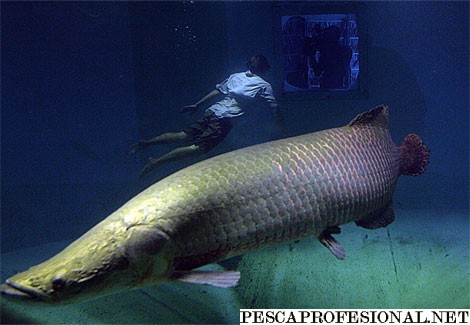 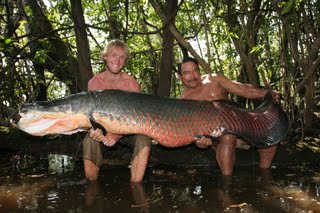 At one time of the year living in poorly oxygenated waters, so the oxygen absorbed by their gills is insufficient, so must breathe atmospheric air or “gasp” at least once per hour. This helps you to breathe since her mouth mucosa is rich in blood vessels, where does the exchange of air without lungs. They do other species of the Amazon, as the electric eel.

Habitat and hábitosVive on the Amazon River, in Peru, Ecuador, Brazil and Colombia, We can also find the species in the Madre de Dios River (Peru) and Beni river (Bolivia), currently it has been introduced for fishing in Thailand and Malaysia. It is also considered aquarium fish, although obviously it requires a very large pond and supplies. Their habitat is flooded almost half of each year by rainfall and snowmelt in the Andes, so part of the year all the trees, and when much low water level (in some high areas of the Amazon plain) It is buried in the mud with his head out, hence probably his way of breathing.

Their diet consists of other fish and even small terrestrial animals, even birds, capturing when falling into the water, or even jumping out of the water.

AntigüedadFósiles the arapaima or pirarucu (or species very similar) They have been found in the Miocene Villavieja Formation of Colombia.

VidaEsta cycle species practicing oral incubation, and reproduction has been adapted to large fluctuations in its environment, it lays its eggs between February and April, when the water level is low, and thereby builds a nest of about 50 cm wide and 15 cm deep, usually in sandy areas. When ascending level, The eggs hatch in the flood season, and have more water to thrive, during the months of May to August. Both parents care for their offspring when it is born and accompany and lead to feeding sites. Small pirarucu eat small invertebrates and plankton. For the second case the pups are placed in formation, such that all form a kind of wall, colocandos all next to each other or above or below other watching and swimming in the same direction. Pirarucu pups can only breathe air reached a certain age.

His bony tongue has medicinal use in South America, It is using desiccated and combined with guarana Grated rind, placed in water. Dose of this drug are administered to kill intestinal parasites. Because bone, It is also used to scrape wood and making tools, and their scales serve as nail file.

His flesh is food in the Amazon, and it is said to be delicious. Since breathe out, usually it is struck and then speared. An adult can yield up 60 kg meat.

ActualTiempo situation behind this great species must have been the quintessential predator lakes and flooded forests of the Amazon. Nevertheless, over the last century has been pursued at an alarming rate. Traditionally they are fishing with the help of harpoons, but with the arrival of the gillnet catch opportunities by men they increased significantly. Although their populations have declined significantly, the high prices reached their meat at local markets, causes remain a favorite target of fishermen. Nevertheless, in some regions of Brazil intensive aquaculture is done with this species, as in the states of Para and Acre (about la capital Rio Branco, where their fry are on sale in stores Municipal Market). some aquaculturists, authorized by the Brazilian government did capture matrices and developed its reproduction in captivity, in lakes and reservoirs, reducing the fishing pressure on wild 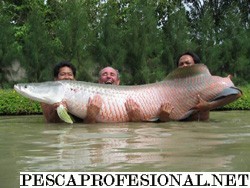 It is a good predator like catfish,eating live fish and dead, as hunting at all levels .

Its preferred habitat, are areas with many submerged trees and sandy bottoms.

Hay mucha aficcion, his fishing rod , because it is a very combative fish . You can also catch the released, with any type of artificial lure.

Fishing equipment, They must be robust, in all areas and we do not want to lose large specimens.