The taimen is the largest member of the family of salmonids, which also it includes trout and salmon.

These fish are ferocious predators that sometimes chase their prey in packs, a practice that earned them the nickname “Otters”.

Its color is gray-green on top, the bottom reddish brown. And they can be huge, large specimens can reach six feet (two meters) long.

Trout, also called Eurasian giant trout, They are very voracious and have a varied diet that includes mostly fish, and ducks, and even mammals such as rats or bats. These insatiable fish also take advantage of them. Some big taimen are known to have drowned while trying to swallow another of his kind a little smaller . 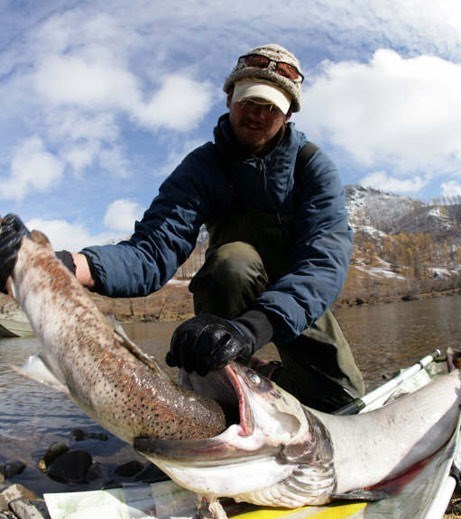 Taimen originating in the rivers of the Pacific coast of Russia westward across the former Soviet Union and Mongolia. Today they have been swept much of their habitat, and populations remain important only in Russia and Mongolia

This river colossus is revered by many Buddhists in Mongolia as a child of a spirit of ancient river , and for a long time he has enjoyed relative peace in Mongolia, where nomadic culture has traditionally avoided fishing.

Nevertheless, the changing lifestyles in modernizing Mongolia have meant more logging, mining and grazing, that they have harmed water quality of taimen. And fishing, taimen that has driven almost to extinction in China, and it is beginning to be felt in Mongolia.

Taimen are distributed sparsely in their habitat. A study of about 60 miles (100 kilometers) of the rivers where the fish still thrive revealed only about 2.000 taimen individuals,those of 26 inches (66 centimeters) or larger. Because of its scarcity, removing fish, even one of the great can be critical.

Today recreational fishing of taimen has become an international drawing card and an important source of income for regional economies. Mongolian officials, along with several non-profit organizations, They are trying to find a balance to curb poaching and fishing regulated drive, and the revenue it generates.