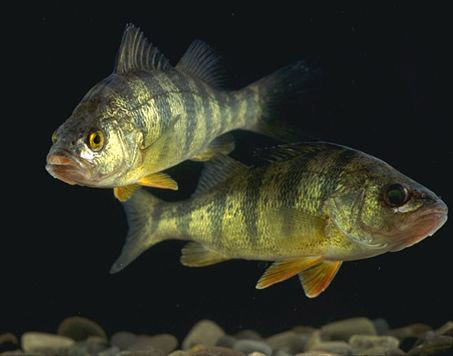 Yellow Perch , It is native to North America ( United States and Canada ) in the north east of the Rocky Mountains ,tributaries to the Arctic and Atlantic and Mississippi River. Its native distribution was driven by a shift of glaciers from the Mississippi River. They have been widely dispersed its natural range. Distribution to other areas of the eastern US. and Canada have been due to its popularity for sport fishing , as well as a forage fish for other species of sport fish such as bass or Alaska.

It is similar to European perch , but they are paler and yellowish , less red fins. they have 6-8 dark vertical bars on the sides. The yellow perch is in the same family as Alaska and Sauger, but in a different family of white perch. The yellow perch size can vary greatly between the water masses, but adults are usually between 4-10 inches (10 a 25.5 cm) long. Perch can live up 11 years, the maximum length is recorded 21,0 inches (53,3 cm) and is registered weight 4,2 lb (1,91 kg). 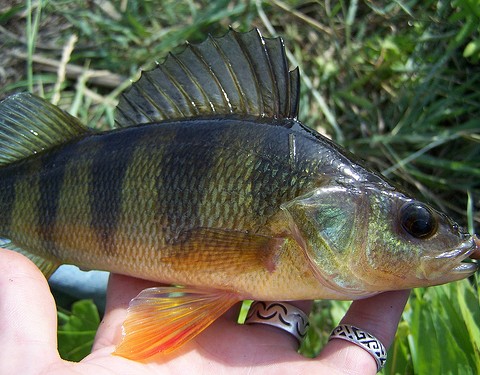 Yellow perch are commonly found in the coastal areas of lakes, but also they inhabit slow-moving rivers and streams, brackish water, and lagoons. Because human intervention, today is in many man-made lakes, reservoirs, rivers and reservoirs. Perch are most abundant in the lakes that can be hot or cold and are very productive in small lakes, in which master and can not be controlled by predation.

They reach sexual maturity, in one to three years for men and two to three years old for females. Spawning occurs in late April or early May, the setting is 10.000 a 40.000 eggs available in weeds, or branches of trees or shrubs that have been immersed in water. After fertilization of eggs, they hatch in 11 a 27 days depending on temperature and weather conditions .

The preferred temperature range for yellow perch is 17.6 ° C 25 ° C, with an optimum range of 21 ° C 24 ° C and a lethal limit over 33 ° C and limit stress on something more than 26 ° C. yellow perch spawn once a year, in spring with big banks and in the shallows of a lake or tributary streams of low intensity. They do not build nest. Spawning generally occurs at night or early in the morning. Females have the potential to generate up to eight times in your life.

Yellow Perch are fairly easy to capture and have been caught while fishing for other species in which they share the same body of water. They are also an important source of food for larger species, and therefore many fishing lures are designed to look like yellow perch.

They can fish with any kind of artificial bait intended for other species of percas, or basses in America called low.