Rio Obi (5,410 km) : It is located in Western Siberia, Russia. making it the longest in the country and the second longest in Asia. Born in the Altai mountains (in Central Asia) at the confluence of the Biya and Katun rivers and empties into the Arctic Ocean, in the Gulf of Ob.

River Ob or Ob river (in Russian: River Ob) It is a long Russian river whose basin, with an area of ​​approximately 3.000.000 km², also it extends through the territory of Kazakhstan, Mongolia and China. It is the westernmost of the three major waterways of Siberia. Like the Yenisei and Lena, Obi, born in the Altai Mountains and empties into a vast estuary in the Kara Sea, runs south to north and drains a region characterized mainly by low altitudes.

With its long tributary, the Irtysh River, Siberian river is one of the longest river in the world arteries, with a course of more than 5.400 km. The Obi and its main tributaries, offer opportunities for seasonal navigation, representing a very important means of communication for a space with strong development potential and, as well, an axis of settlement dominated by a few large cities such as Novosibirsk, Yekaterinburg and Omsk, large industrial centers. Great River Basin, in recent decades, It has become the main site of extracting hydrocarbons from the Russian Federation. These human activities, sources of wealth and pollution, threaten rich and varied natural resources, already weakened by global warming.

Administratively, runs through the federal subjects of the Russian Federation Altai Krai, Oblast Novosibirsk, Tomsk Oblast and the autonomous districts of Khanty-Mansi and Yamalo-Nenets.

The Obi is one of the longest waterways of Asia and the world; however statistical data relating to its total length may vary greatly depending on the source consulted. The main course of the Obi, Biisk measured downstream of the piedmont Altai at the confluence of Katun river and river Biya, until the beginning of its estuary below Salekhard, reaches 3.650 km, to which should be added the 800 km from its estuary, that is 4.450 km. And, instead, the birth of its main tributary, the Irtysh River, It is considered as the beginning of a waterway Obi-Irtish, the total length is reached 5.410 km; (6.210 with the estuary). 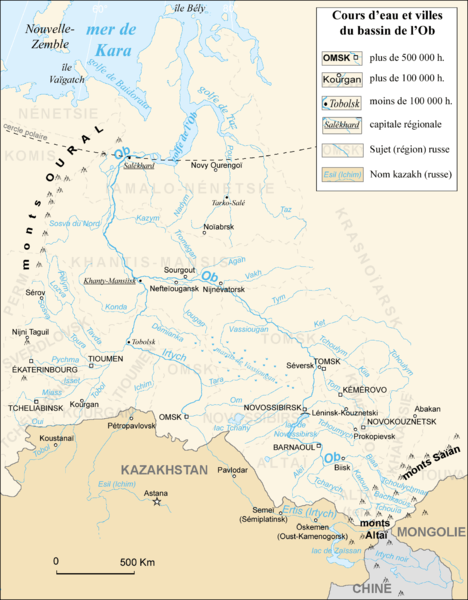 The top of the main river course extends from the confluence of the Katun and Biya up to meet the Ob with its tributary the Tom River, about fifty kilometers northwest of Tomsk.

The meeting of the two rivers originating in the Altai Mountains, el Cotton (often fed by melting snow of the high peaks), to West, and Biya (emissary of Lake Teletskoye), To the East, It gives birth to the river Obi, downstream of Biisk. These two waterways, respective lengths 688 Y 301 km, and constant flow, contribute 626 m³/s y 477 m³ / s the river newborn.

Obi takes, in the first part of its course, a western direction, and receives, on the left bank, numerous tributaries of short length (comparatively to below), including Peschanaya, the Anuy and Charysh. The river still has a relatively strong average gap of 2,5 ‰, but it hampered his bed by sandbars and islands. After his encounter with the river Charysh,[4] It is oriented to the north, taking the direction of Barnaul, the valley and expand the channel. Obi definitely acquires the aspect of plain water course after receiving the contribution of Aley, its left bank tributary. in Barnaoul, Obi takes a western orientation, its valley widens further, reaching measure between 5 Y 10 kilometers wide, with the left bank steeper than the right; its bed thickens (numerous arms, presence of lakes) while its average depth increases. The river changes direction again in Kamen-na-Obi, following a course oriented northeast, the valley narrows, measuring no more than 3 a 5 kilometers wide before entering the vast reservoir of Novosibirsk. From the latter city, always discoursing to the Arctic, Obi enters a forest region where dominate birches and poplars. Its speed decreases step, its valley measures about 20 kilometers wide on average. The upper course ends when the river meets its large tributary of the right bank of the river Tom near the city of Tomsk.

This part of the river runs from the confluence with the Tom to the junction with its main tributary, the Irtysh River; Here the course follows a western direction.

Below the confluence with Tom, Siberian water course receives several tributaries, If the left bank, They are short length (Chaya, parabola), with the exception of river Vasiugán, the right bank, Unlike, They have more important watersheds. Obi receives contributions on river Culym, the river Ket, the Tym River, Vakh river and the river Agan. From its junction with the Agan, the river takes a western direction and receives numerous tributaries of medium length: on the right bank, the Tromyegan, the Lyamin and Nazym, on the left bank, Grand Yugan and the Great Salym, before joining its main tributary, el río Irtysh cerca de Khanty-Mansiysk. The latter, He born in the mountains of Mongolia, It has a length much greater than their Obi 4248 km pero, due to inadequate rainfall falling in the watershed, It has a low flow (less than 3.000 m³/s).

From his encounter with the river Vasiugán, Obi falls within the scope of the vast Siberian taiga. Its slope decreases and its valley widens again to achieving 30 a 50 kilometers while the main riverbed widens, and one kilometer in low waters, You can achieve three kilometers in the period of floods. The bed depth remains between the 4 a 8 meters in the shallows. In flood period, Obi overflows its lower channel and floods the valley several tens of kilometers during two to three months.

This last part of the course begins after the confluence with the Irtysh. Obi leaves its western direction to take a north-northeasterly direction to Peregrebnoye. In this city, fully takes an orientation north. The river crosses the northern boundary of the taiga before entering the tundra when it reaches its delta.

In a broad valley 30 kilometers, dominated by medium heights on the right bank, watercourse runs slowly dividing, shortly before Peregrebnoye, two arms: the great (Bolshaya) Obi right, the small (Malaya) Obi left. Each of its arms receives tributaries, the Kunovat and Kazym for the first, the Synya and Northern Sosva for the second. Before reaching Shuryshkary, the river has a bed 19 kilometers wide and 40 meters deep. When confluent, beyond Salekhard, with Poluy, Obi is again divided into two arms, L Khamnelsk OB (left) and Nadym Obi (right) to form a delta. This delta opens onto the Gulf of Ob (Russian Obskaya Guba), estuarine qualified. Ambiguity on this space and on the term to be used to designate leads to their exclusion, all sources, in calculating the length of the river. With 800 kilometers long and 30 a 100 broad, It has its own catchment area, covering an area of 105.000 km² before his meeting with the Kara Sea.

On the east coast, It opens a diverticulum, the Gulf of Taz, mouth of the river of the same name, draining the autonomous district of Yamalo-Nenets and has a basin 150.000 km and longer than 1400 kilometers.

the Gulf (or estuary) Ob, little deep (from 10 a 12 meters), divided peninsulas Yamal and Gyda; the eastern coastline is very steep while the western is low and marshy. 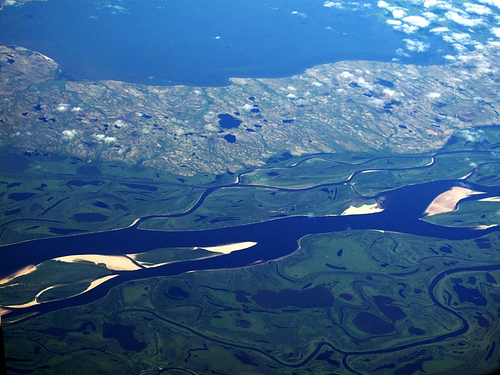 Obi basin covers a total area of ​​about 2.975.000 km². This surface area includes a steppe 521.000 km² little irrrigada not result in any surface and therefore no contribution reinforces the river flow. Depending on the consideration or exclusion of this space, this basin is the fifth or sixth largest in the world after the Amazon, of Congo, Mississippi, Nile and more or less like the Yenisei.

The basin is shared by the territory of four states: Russia (73,77%) and Kazakhstan (24,71%) which share almost all of its surface, China (1,51%) and Mongolia (0,01%) which is not involved more than marginally. Mostly (85%), It consists of plain Western Siberia. The only relief is formed by small hills, Grivy calls, Southwest facing – northeast. This plain is a flood zone; sediments accumulated in more than 6000 meters thick layers on land was high. These extensive horizons bear the mark of the great glaciations, with the presence of numerous moraine trails and terraces fluvioglacial.

Obi should, on the other hand, su estuario a is ice ages, in whose bottom forms a delta, This estuary is the testimony of an old submerged coastline, when the continent was more sunk by the weight of ice that extended to 110 degrees east longitude.

To its confluence with the Irtysh, Obi takes an ancient glacial channel previously occupied by a watercourse running toward the Aralo-Caspian depression. The elevation of the southern part of Siberia the hydrographic network oriented to the north. This southern part is constituted by the mountains of Altai and ante-country corresponding to the area where the river collects a wealth though hardly represents more than one 10% of the total area of ​​the basin.

The basin has varied vegetation. To the south, in the area corresponding to the southern Siberian climate, They develop Siberian meadow, steppe grasses, injured with depressions salt or solonetz, of bogs, with birch groves, poplar and pine.

Irtysh basin, on margins south-western and in the valleys of the Tobol and Ishim, It is situated on the edge of the desert climate of Kazakhstan and is the area of ​​steppe where no trees are. More to the north, taiga takes place in the Siberian climate and cool summer is dotted with marshes called ourmany, it precedes the tundra which occupies the lower river.

More than fifty species of fish live in the basin of the Obi and the extensive estuario.De all, the most important economically are some varieties of sturgeons as Stenodus leucichthyse, and Coregonus nasuse. there are also: la miss, monkfish, Carp, pike and alburno. Seasonal freezing of water in watercourses the bottom of the basin, (from the junction with the Tym to the delta) It contributes to a sharp decrease in oxygenation of the water, and involves high mortality in fish. 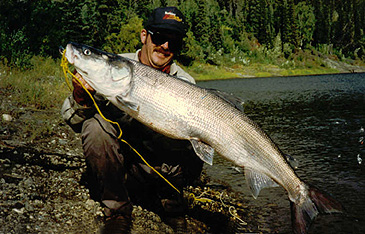 Among the mammals in the valley of the Ob and its tributaries it is possible to discover many valuable fur animals, like mink, marten (Mustela erminea), The Otter, the Beaver, but also the wolf, the Fox, The moose, Arctic hare and muskrat. More of 170 species of birds live on the banks of the river and the tributaries that supply will, among which are numerous partridges, geese, pathos, grouse or bargains. 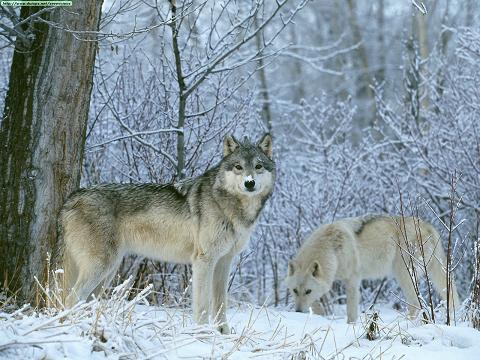