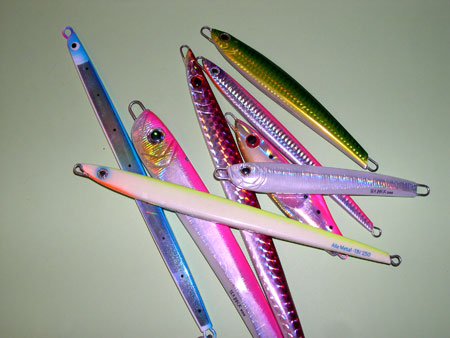 Also called jigging has become in recent years in an unprecedented phenomenon in world sport fishing. Originally it was practiced traditional way in Japan and even years 90 no news of the first practices in Europe.

This practice, It is basically fishing from boats drifting drifting, I unanchored, using jigs which are freely dropped to the bottom. In this point, the fisherman is making moves in shape while collecting pull the spool simulating a fish rising to surface. This is extremely attractive for large predators to the point where you can catch very important size pieces.

This fishing usually practiced in depths from 25 meters to 250 m. The usual technique is to keep trying different rhythms pulls either long, short, spaced or consecutive and combinations thereof.

The most important factor is to use the lure. In the days when the fish are very aggressive all you have to do is present the bait where it is believed that the fish are located, For this we will be very well the help of a probe to locate shoals and background settings, sometimes a slow fall produces more bites other times fast descents are more effective,

Several factors affect the rate of fall of a decoy, for example, the weight , the size and mass of the trailer using, and the size of the line on the spool. . Usually they want unacaída slowly in cold water and a rapid drop as the water warms.

It is often used a combination of basic colors, as black, blue and brown, with contrasting chartreuse, red or blue water taken and translucent colors and Pumpkin Watermelon for clear water. Some of the colors are designed to mimic the patterns of lobsters can be very effective too. I think the most important thing to consider in your choice of colors is to have some sort of change, more in muddy water in less clear water,you always have to provar entire repertoire that we have when the situation is difficult, taking into account the basic principles.

It is better to throw the wrong place at the right lure, that the best lure in the wrong place. First you must locate the fish, concentrate all their efforts on finding an area that is sure that the fish are and focus all resources in the area.

I can not stress how important is the confidence of fishermen. If you do not believe that the fishing area has a population of fish or no confidence in the bait or technique that uses, I can not help but guarantee your efforts will produce poor performance in weighing. Convinced that you have made and continue to make the right decisions all day.

In the fishing jigging lines they are often used preferably braided wing when having more sensitivity,given its smaller diameter and greater resistance, also generally put flourocarbono nylon or low.

short rods about two meters and long hilts, as well as the reels have to have a great capacity to house about 300m of a 0,40.

There is a wide range of lures. The most common is made of rubber or silicone. These come in many forms and may resemble a worm, shaped frog, fish-shaped paddle tail, lizards or different insects. The colors of these can vary from bright yellow to a transparent brown with silver flakes and red. Also during the summer months look at colors for warmth, such as brown, blue or black hair.

Other more traditional types of use dyed or natural whitetail deer tail hair on the outside. called Bucktail lures, They are widely used in North America and Midwest.

Other types of materials are also used in building bodies template ( SKIRT ), Chenille wrap as a hook on the shaft, various pens hackle, hair or fur, Marabou, flashabou, and other materials. Construction is often similar to the process of Fly Tying. Some templates are constructed identically to their counterparts of artificial fly, an example of a “Wooly Bugger”Fly, but tied to a head template, bodies can be brightly colored or more opaque. They are often designed to mimic local dam fish or large local insects.