The Weberian apparatus is a game ossicular, derivatives 4 a 5 previous vertebrae, connecting the swim bladder to the inner ear of fish ostariofisos. In this way, bladder amplifies and transmits vibrations to the ear. It was named in honor of the anatomist and German physiologist Ernst Heinrich Weber (1795 – 1878).

Since fish live in an environment where they have to move in three dimensions, buoyancy plays an important role in determining the ability of a fish to swim efficiently. Fish use a couple of different strategies to solve this problem, They use their pectoral fins to create dynamic lift, like airplanes and birds. Since these fish swim, their pectoral fins are positioned such, a pressure difference that allows the fish kept at a certain depth is set. The two main drawbacks of this method are that these fish must be kept moving to stay afloat and are unable to swim back .

The other solution used to have parts of your body, they are actually less dense than water, allowing fish to rise to the surface. The two substances used to perform this task are the gases and oils (lipids). Fish use gases to change or maintain their buoyancy generally do by regulating the volume of gas within its swimbladder. The compressibility of the gas allows it to behave according to Boyle's Law, which states that the pressure is inversely proportional to the volume at constant temperature. Lipids are the most common substance used to decrease the density of a fish. Incompressibility lipids are likely to prevent Boyle's Law, allowing greater depth variation fish without concern compensation pressure changes. 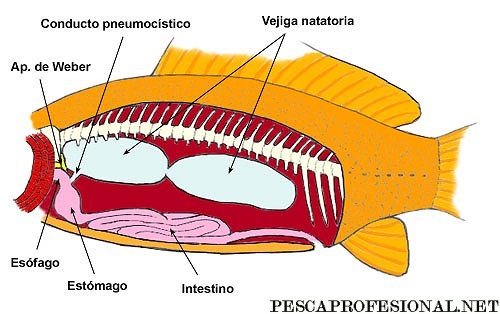 The swim bladder is an organ floating possessing many fish. It is a flexible bag walls, gas-filled, dorsally situated below the spine and above the digestive tract. Buoyancy control through a complex system of gas exchange with blood, and allows the fish to ascend or descend into the water without using muscles. You can also have other functions, such as hearing, in certain species of freshwater. 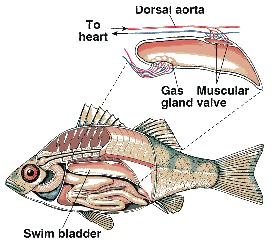 When you eject gases by muscular compression, increases the specific weight, facilitating decrease in water. If it is filled with gases, favors the ascent to the surface. The gas discharge process is based on acidification of the blood produced by becoming glucose into lactic acid. This is released into the blood of oxyhemoglobin oxygen and carbon dioxide from the sodium bicarbonate, broadcasting in the swimbladder. Gases not immediately reach the swimbladder network pass through capillaries efferent, They diffuse from there to the afferent and circulated back into the gas gland.

Fish that are rapidly brought to surface from deepwater often exhibit internal damage suffered distension swimbladder when subjected to large pressure variations. A method for deflating one dilated swimbladder, It involves puncturing with a hypodermic needle intramuscular or the floating member fish.

SYMPTOM CHANGES ARE GIVEN BY PRESSURE ARE brusque:

The fish physostomous (lucio, Salmon, tent), have a bladder contact your digestive tract, allowing them to make adjustments quickly -emiten bubbles to decompress this body when they move up the column acuática-. The fish fisoclistos (black-bass, lucioperca, perch), own independent bladder, making it impossible for them to release air quickly. Some cartilaginous fish, like sharks, lack swimbladder.

When the bladder inflates, You can start affecting other physiological functions such as circulation and respiration, inflammation of the bladder pushes other organs.

The traditional method consists of sticking a hypodermic needle – connected to a syringe plunger – at the right side behind the pectoral fin and slightly below the sideline.

Bladder often will swell enough to produce a visible lump on the side of the fish that bulge marks the area you click.

Nevertheless, it takes a lot of practice to know exactly where to drill if this bubble is not visible. Without knowing the right place it is often a source of problems. Inexperienced fishermen can sometimes do more harm than good by puncture of other internal organs.

Lately it has chosen a relatively new procedure, he said is easier and less intrusive. It is open mouth lethargic low and sticking the needle through the top of the throat and directly into the bladder.

“You put the needle right on the line where the esophagus begins and insert the needle straight about 1 / 8 inch ( 3-4 mm)” . “You can hear the whistle when the needle pierces the bladder.”

Then, the fish is immersed and syringe while pushing the needle for visual conformation, It is outgassing. 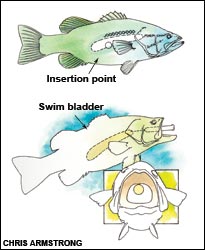