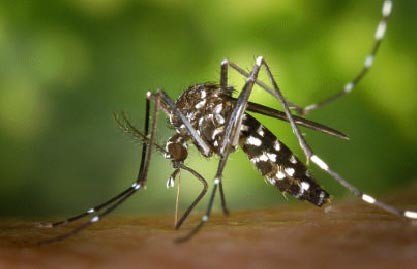 CATFISH IN FISHING AND TENTS IN RIO EBRO we must have ARRIVAL TIGER MOSQUITO, WHEN spring arrives and temperatures rise, START THIS MOSQUITO make its appearance, Here you have a few small tips to help deal with them.

The tiger mosquito (Aedes albopictus) It is a kind of nematócero Diptera belonging to the family Culicidae. It is characterized by its black color with white ornamentation thorax and abdomen, legs to black and white bands and a central longitudinal line conspicuous white chest and head. It has a length of about 5 Y 10 mm. Like other mosquito species, the female has a thin elongated tube and, proboscis, so that stiletto, used for chopping and extracting vertebrate blood, especially mammals and birds, fail to develop eggs. Males of the species, like the other mosquitoes, They feed on nectar. It is included in the list 100 of the most harmful invasive alien species in the world[1] the International Union for Conservation of Nature.

The tiger mosquito is an invasive species native to Southeast Asia, having spread Africa, America and Europe since 1979 and later by the Pacific. Arrival may occur during the transport of persons, or goods accumulated residual water such as used tires, or ornamental plants such as lucky bamboo (Dracaena sanderiana). Their eggs are resistant to drying so you can also enter imported used tires that carry their eggs dry internally houses, once they make contact with water, hatch and larvae emerge first stage (Four possible). 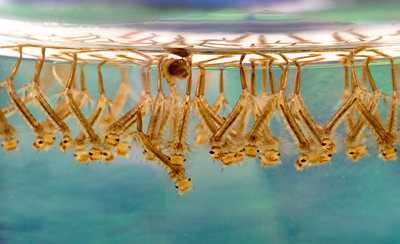 The larvae of this species develop in containers where small amounts of water especially if they are in shaded places such as jars exist, cubes, vases, dishes pots and other objects containing water gardens, yards and vacant lots. Its original larval breeding consists of water-filled cavities in trees. In our environment it is primarily an urban mosquito that systematically exploited water points of human origin for reproduction. their sting, even through thin clothing like socks, It is very annoying, occurring during daylight hours that some of the native species do not usually sting

The problem associated with this mosquito, originating in Southeast Asia, They are the discomfort of their bites, although not dangerous, They are far superior in number to those of other species. In tropical and subtropical countries may be transporting agent of different types of virus, Nevertheless, in these latitudes this does not happen. But, In addition to preventing its expansion it is important to avoid their bite, for what you can use one of the most common methods: repellents. A field in which, according Salvador Giménez, family physician and director of the Health Center in Paris, in Barcelona, the newest is the active ingredient Icaridin, which has two important advantages: effectiveness measured in hours, with a rate of 95 percent effective for eight hours, allowing under normal conditions is to be applied only once a day, and safety in their use, backed up by a battery of studies of environmental protection and the Organization Mercedes Camps, Dermopharmacy member of the Official College of Pharmacists of Barcelona. repellents, Add, applied to the skin, film forming, as its name suggests, It does not kill the insect, but depending on the type of substance contained they have a deterrent effect on it or block the sensor to these insects detect human presence. But not all mosquitoes are equal nor are all repellents. These, explains Camps, They can be chemical (synthesis), as diethylmethyl-benzamide (ten to forty percent), piperidinecarboxylic acid the (from 10 to 20 percent) or permethrin (between 1,5 and five percent), or natural, such as citronella oil or ecucaliptus or basil. The most effective and durable, adds vocal, up to eight hours, is the diethyl-methylbenzamide or DEET, considered, according to her, repellent reference and commonly used for repelling mosquitoes, ticks, fleas and flies, but is not effective with wasps and abejas.Los derived from plants are effective but its effect does not last more than two or three hours, so that its application must be repeated after that time, states. Nevertheless, DEET, Add, It is most effective when it comes to fighting species of tropical mosquitoes. Nevertheless, and according to the specialist, In the latter cases should not rely only on the repellent, as, Besides, It is convenient to use barrier methods such as mosquito, clothing, and placing screens on windows. In addition to the products already mentioned, concludes Camps, repellents are doubtful efficacy as some electronic devices and vitamin B1 (thiamine), although these, stresses, It has not been shown to actually be effective.

The insects are attracted by visual stimuli, thermal and olfactory, Explain. Some tips to avoid mosquito bites caused by. uniform application: It is necessary to extend the repellent product for all body parts that are to be exposed, Also in the face and neck. It is not enough to apply it on the inside of the wrists or in specific locations because the effect is not expanded. First hands: How to apply the product is, First, sprayed hands and then rub the rest of the skin. This advice is especially important in children, since not give it directly apply easier and safer. Nevertheless, I is important not to spread it in the hands of the little ones so you do not suck. Always the last: Mosquito repellent is the latest product to be applied on the body, after makeup, colonies, deodorants, etc. Before leaving: This type of product must extend, unlike photoprotective creams, immediately before exposure to mosquitoes because the smell of the product is what repels and with the passage of time is disappearing.. And again: It needs to be applied once and eight hours to do it again. You can also give some exceptional cases where you need to apply it more often: for example, If you sweat a lot, if it has rained or if it has a bathroom, in which case the bug will have been eliminated. always informed: Must always read the product instructions because protection depends on the concentration. For example, in children's concentration should be lower and tropical just the opposite. Light clothing: Because it is a color that attracts less these insects.

THE SMELL OF MOSQUITOES

The mosquitos, actually midges, because only they bite the females to produce eggs, They find victims by smell. Are attracted to a concentration of different products people eliminated skin. Repellents create a barrier and produce an odor that does not appeal to midge. The most common compounds are: DEET and natural derivatives such as citronella or eucalyptus.

*will: It should be one of the fastest ways to soothe a sting. Simply the bite area is wetted and then the salt is massaged area. Itching should cease immediately.

*essences (oils): They are applied directly to the area of ​​the sting. Lavender can be used, cedro o hamamelis. Even you can be used inside the banana peel to relieve itching. And a mixture of olive oil and vinegar can also help.

*it: garlic cut in half, and rub on the bite. It is a remedy recommended especially for young ones.

■ Saliva is the easiest and most accessible remedy for all, thanks to some of the ingredients in our saliva can feel relief in the bite even if it is important and its effectiveness is less severe.

■ Ammonia is the most effective remedy for all, especially if we applied soon after the bite occurs.

■ Another remedy is generally good for any kind of itching and specifically for itching of mosquito bites is the tea tree oil. Apply several times a day on the bite.

■ can also help moisten the bite with water and rub lightly with salt.

■ You can also try to make chamomile tea (as concentrated as possible), you let cool and then apply a bite on cotton.

■ Aloe Vera works miracles on skin and bites would not be less, in gel relieves bites and helps reduce inflammation.

■ If you rub the pulp of half a lemon over the surface of the bite you can also eliminate itching.

Auyentar A MOSQUITO WITH REMEDIES

• Oil of lemon eucalyptus: considered by experts as the best essential oil that repels mosquitoes. In fact a recent study conducted by the Ministry of Agriculture of the United States compared 4 synthetic ahuyentadores with 8 natural, and the most effective proved lemon eucalyptus oil

•Citronella: Oils and citronella candles are natural repellents against mosquitoes (and wasps and other flying insects). You can buy candles table or large candles that are fastened on the floor and lit help keep mosquitoes away

•Tomillo: Another study found that two compounds derived from thyme essential oil had greater capacity to ward off the commercial repellent DEET known. Also clove oil is effective. However, you should not use either of these two essential oils without diluting them before

•Lavanda: For inexplicable reasons, it seems that mosquitoes does not relish the scent of lavender. Use lavender candles, dried flowers or essential oil to keep them away.

•At night, avoid being near a focus or a strong light, because the light will attract.

• Avoid wearing clothes very bright color, especially yellow, which it is a color that calls mosquitoes.

• Place at the foot of the bed a container with a mixture of plants that repel, as can be lavender, nail, Citronella or basil.

•·Consume lots of foods with vitamin B (almonds, mushrooms, lentils ...) that make the skin peel off an odor that goes unnoticed for us but them away.

• tend to prefer people who have a low level of zinc, so that it would be in summer reach higher levels of this mineral, we can find in meat, soy or milk.

• Avoid summer colognes or perfumes that have a sweet smell, as it will attract mosquitoes

• Put basil plants at home, They do not like the smell they give off and usually go.

• Put a glass with vinegar by the window.

• Fill a spray bottle with tea with lemon and sprinkled the body with him.

I hope this SERVE AS SUPPORT TO CONFRONT THE FISHING SEMINARS

One thought on “TIGER MOSQUITO”