Fishing is one of the oldest human activities. Practice records date back to several thousand years. Products obtained from ellase play an important role in the human diet as a source deproteína animals, minerals and essential fatty acids, between otros.La vastness of the ocean and its biodiversity, long it led to the belief that the sea was an unlimited supply of resources, capazde sustain human population indefinitely.

Nothing seemed alert sobrela need for rational fishing methods, or on environmental seriasconsecuencias which can lead to improvement of activity pesquera.El fishing vessels and techniques denavegación determined explosive growth of fishing from losaños 50. But the ocean is not inexhaustible nor its infinite resources. According to the full utilization or exploitation of these resources fuealcanzando, elcrecimiento began to decline to stagnate in the years 90.Según estimates made by FAO in the early nineties,search 75% major groups of commercial fish were coming allímite maximum sustainable catch, overexploited or depleted. Despite queel future of aquatic living resources as a source of food depends delcese of predatory practices, today, organismossiguen million literally being decimated by fishing gear whenever mássofisticados, Poisoned with tons of municipal and industrial waste oseriamente affected as a result of altering the background marino.La awareness worldwide of the severity of estosproblemas, It determined an increasing orientation selectivity lasartes, improving catch quality and optimization of suaprovechamiento. This trend points to better management of recursospesqueros, which moreover it coincides with the current national requirements delmercado.A, the rules concerning the exploitation in the decree estáncontenida 149/997 from 7 May 1997 deGanadería Ministry Agriculture and Fisheries (TIPS)1The data obtained by satellite navigation system, consistent and accurate, They allow faster and exactitudtanto in locating fishing areas and return to port. Fishing arts: Are all instruments, quepuedan gear and tools directly used for fishing or hunting acuática.Equipos: Are those useful or necessary elements to improve the use of lasartes.Pesca: It is considered fishing activity aimed at extracting water fish,invertebrates or aquatic plants and previous acts or posterioresrelacionados immediately with such aquatic extracción.Caza: Action to capture amphibians, reptiles, birds and mammals,whose total life, either partial or temporary water.

CLASSIFICATION OF FISHING AND HUNTING AQUATIC

3.1 According to the aquatic environment in which operaFluvial: Which it takes place in rivers and natural waterways or artificialesLacustre: The one held in Lagos, lagoons, oartificialesMarítima natural marshes and reservoirs: Which it takes place in the mar.3.2 by purpose:Research: extractive fishing activities without commercial purposes, exploratory decarácter, or prospective experimental.Comercial: extractive fishing with comerciales.Deportiva purposes: Individual fishing or personal, Lucroy made non-sports-purpose or subsistence recreativa.De: fishing activity conducted non-profit and intended aproveer food on the holder and his family. 3.3 According scale or magnitude of activities:artisanal fishing: Commercial fishing activity on a small scale, that empleaembarcaciones whose Gross Registered Tonnage (GRT) Industrial not exceed 10toneladas.Pesca: Capture process and related fishing operations carried higher porbuques of 10 GRT. 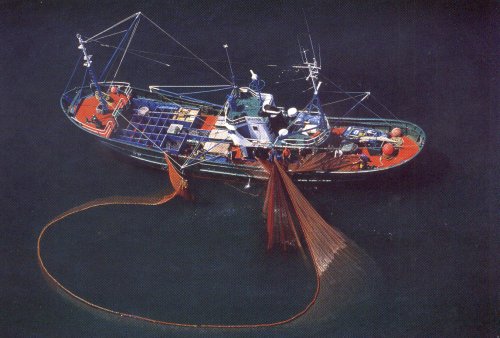 Fishing gear can be classified in various ways. Unaclasificación appropriate to the didactic purpose of this work, It would be as follows:5.1 According to the ability to be displaced: a) active: They are moving arts in the aquatic environment, so go alencuentro of the species objetivo.Ejemplo:• networks arrastre.b) Pasivas: They are devoid movement arts. Once openwork permanecenfijas in place until they are removed, being the target species Lasque will meet. By the capture process also sondenominadas "traps" .Examples:• Nasas • Gillnet • Palangres.5.2 According to its structure and operation:a) mesh (networking): They are arts that are constructed by interlacing yarns or other anudandoentre, rope or wire to form squares or rhombuses, you llamadosmallas. The shape and size of the mesh depends on the type of network or queestá occupy place in art. 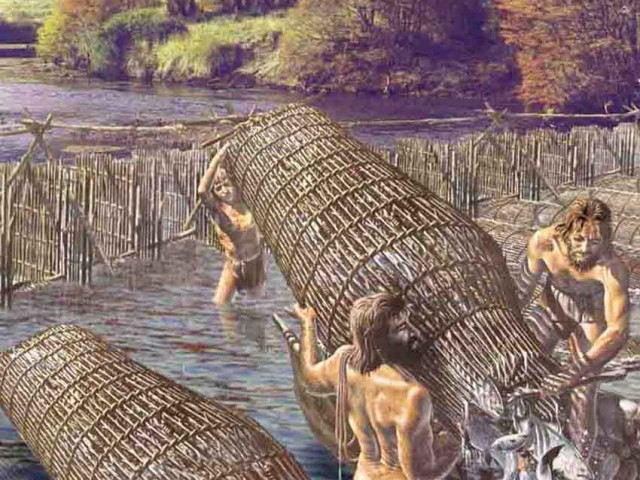 Threads:Thread Types:-Monofilament or tanza: continuous thread, untwisted, a compound solofilamento.- twisted wire (Fig. 2): yarns composed of several filaments themselves trenzadosentre (for knotless netting) Currently networks are made defibra synthetic yarns such as polyamide or acrylic, which they are lighter than water yresistentes natural fiber yarns used previously.- twisted yarns (Fig. 3): yarns composed of more than one filament, Turned on itself.

buoys:They are floating elements, which can be used for different purposes. They lasempleadas fisheries are basically two types:- position indicator buoys, whose purpose is to indicate a location(roosters, radioboyas).- Flotation buoys: They are elements that maintain sustained ciertonivel cabo.Las wire or buoys can be made of any material whose seamenor density than water. The best materials are cork (currently he endesuso for its high cost) duro.Los plastic and plastics used can be of two types: hard plastic, nodesgranable suitable material for the manufacture of large, hollow buoys, and poliuretanoexpandido ("Foam Plast" ®), crumbly material. The latter is widely used to craft level to manufacture and compact boyaschicas.

Lastres:They are weights used for art to be located and maintained at laprofundidad deseada.En craft lastres networks are used as the "dead"(stones, concrete blocks), linguetes (eg iron beams. deriel segment) or pieces of lead included in the inferiorEn out relinga commonly used industrial networks anchors, or iron chains sujetandocada link to footrope. The aim in both cases is to prevent chelae buoys separate network fondo.Para minimize the possibility of snagging on the net, quetanto buoys is preferable as the sinkers are round and smooth. 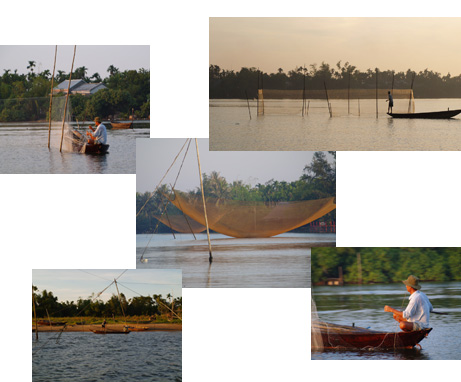 Adapting the design of fishing gear and the capture operation (drift velocity,depth, etc) the characteristics and the ability to shift the especieobjetivo, It is achieved to maximize the efficiency of captura.La swimming ability and to keep trying to escape from each group of fish sonimportantes factors to consider to achieve the efficiency of fishing gear and suexplotación:Benthic fish do not usually leave the background, defactores even under chemical influence biological or physical. His reaction to the vibration of gates and equipment esmínima; and the turbulence of the propeller is weak and limited to few meters.The zone exhaust perturbation (instantaneous jump up followed porintento be buried later) It is weak in the euphotic zone and very weak in disfotica.Pueden escape relatively short distances (40 a 60 times body length) antesde get tired. The escape velocity is up 5 times the total length of the body porsegundo.Los demersal fish may leave the area due to factors alimentación.Reaccionan biológicoscomo the vibration of the propeller turbulence and equipment arrastremás strongly than the previous group. The reaction centers euphotic laszonas disturbance is greater than the escape disfótica.Suelen disturbance center layer in a horizontal plane down, to velocidadesde up 6 times body length per second (It tends to decrease individuosgrandes). The distance or displacement exhaust is several times greater than in lospeces bentónicos.Los pelagic fish can change this group of biological porfactores spawning habitat and feeding the bottom in several layers lazona pelagic and demersal. Physicochemical factors may also influence this group elmovimiento; temperature and salinity can limit hábitat.Son very sensitive to vibration of the propeller turbulence and other elements drag LaRed. The visual reaction in eufófica area is the largest among all gruposecológicos and weakens the maximum distroficas.La areas swim speed is very high, from 6 a 8 times the length of the body porsegundo, and the ability to continue leaking until fatigue appears is great(300 a 1100 times body length), which obviously it implies the need for greater operating speed gear.